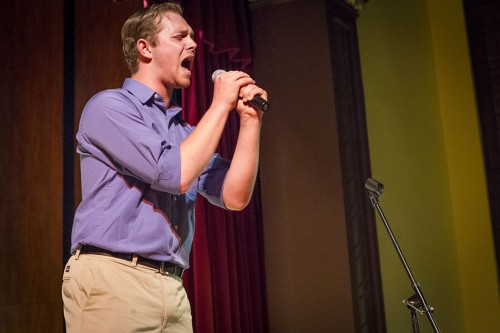 Junior music major Stephenson Holder performs at the La Verne Idol semifinals Tuesday in Morgan Auditorium. The contestants had 60 seconds to perform a capella versions of a song of their choosing. Audience members voted for their favorite singers. Holder selected “What is it About Her?” by Lionel Bart as his piece. / photo by Ryan Gann

The curtains opened, the lights dimmed and the voices of La Verne’s Idols filled Morgan Auditorium on Tuesday.

This year contestants were facing a new challenge since they now had to sing their song in front of a live audience with no music backing them up.

There was a small panel of judges in the back of the auditorium that gave the contestants feedback on their musical abilities, where they needed to improve, and told them what they enjoyed about their performance. The judges – Michael Lamkin, Kathleen Lamkin and Carol Stephenson – were all music faculty members.

Some of the songs that the contestants sang during the semi-final round included “Stay” by Rihanna, “Remembering Sunday” by All Time Low and “Creep” by Radiohead.

The La Verne Idol competition started off with auditions March 12-14 in the Campus Center Ballroom.

Contestants gathered in a small room and waited to be sent into another small room where they performed a song a capella for a panel of judges.

If they made it to the next round they were given an information packet and a golden ticket.

“We literally get the whole music department involved,” said auditioning panel judge, junior liberal studies major, Mason Sustayta. “Whether it be getting students and faculty to be a part of the live band, professors and mentors to be apart of the judging panel, or just students to come and support us.”

Sustayta, the first La Verne Idol winner, returned to the stage this year as host of the competition.

“It was very different to host, rather than to be a part of the competition. It wasn’t as thrilling, but I’m willing to do whatever I can to make sure La Verne Idol comes out as a great success,” Sustayta said.

“The amount of time actually putting on the production is nowhere near the amount of time it takes to prepare for it,” said junior music major Emmanuel Lagumbay, one of the directors of the show.

The production process entailed taking care of flyers, organizing the audition process with a professional set of rules; budget prizes, as well as merchandising and other costs for the event; publicizing the event through different forms of social media, and then having to get ready for the actual event itself.

There was planning for proper amounts of things to be distributed; accounting for the amount of time contestants will get to perform, gathering qualified judges, taking care of sound, lighting, and any other cues, and other work that goes into putting a successful production on.

“The competition seems to have gotten harder this year, and it makes sense. With more on the line, we anticipated contestants to bring their best,” Lagumbay said.

“All the competitors did, and it’s really a shame not all of them get to perform again for finals, but in the end, the superlative performer will take the whole prize package home,” he said.