By Candice Nuñez, Stephanie Ball on March 1, 2013 in LV Life 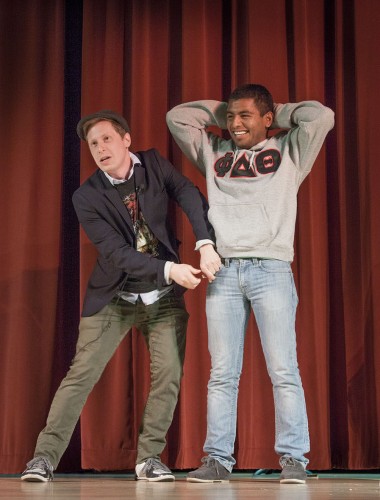 At CAB’s event on Tuesday sophomore criminology and psychology major Juan Mejia-Simental is pickpocketed by magician Ben Seidman on stage in the Morgan Auditorium. Seidman has been practicing magic since age 6 and grew up in Milwaukee, where he attended the University of Wisconsin. He finished his senior year at the University of Nevada, Las Vegas, to study with other magicians. / photo by Stephanie Ball

Seidman started off the show with a few standup comedy jokes and students seemed to enjoy their quirky nature.

His first trick managed to put the audience on edge by somehow making his watch, ring and wallet disappear and then reappear suddenly.

As the show proceeded it was apparent that students were eagerly waiting to participate in the tricks with Seidman.

Juan Mejia-Simental, sophomore criminology major, was the first member of the audience called on stage.

“I was very nervous when I walked on to the stage I felt like I got sudden stage fright,” Mejia-Simental said.

Seidman asked Mejia-Simental to take a dollar bill and write his name on it with a red sharpie and then asked him to place the dollar bill in his front pocket.

Before the audience knew it, Mejia-Simental’s dollar appeared safety pinned to the back of his jacket.

“I did not feel it at all it was crazy,” Mejia-Simental said.

Later in the show Simon discussed the topic of fate and if everyone in the audience believed that everything in life was predetermined, Seidman was unwaveringly ready to prove this theory to everyone.

Seidman randomly chose members of the audience to give him single digit numbers to write on a piece of paper.

He then asked a student to select a name tag that had various names written on it and for her to hold onto it.

She was then asked to dial the numbers on her cell phone and a man named Patrick answered. To the audience’s surprise the name tag that the girl had chosen said Patrick.

“That was definitely my favorite trick, it was crazy that the numbers the people had chosen ended up dialing the name of the guy who was on the name tag,” Cintya Lopez, senior computer engineering major, said.

Most of the students had nothing but great things to say about Simon’s performance.

“I would love to come see another magic show again.”

Seidman gave the students on campus just a little taste of his world of magic that left them wanting more.

“I liked a lot of the jokes that Ben made he had me laughing and on the edge of my seat the whole time,” Danielle Wilke, junior athletic training major, said.

Not only was Seidman a resident magician in Las Vegas, but he also was a writer for Criss Angel’s show “Mindfreak.”

It was Cindy Vallejo, junior communications major and CAB’s comedy chairwoman, who decided to bring Seidman to La Verne.

“I wanted to bring something different so I brought a magician since the mentalist event was a great hit last time,” Vallejo said. “I heard very great reviews from other schools about Ben Seidman so I decided to bring him to our campus.”