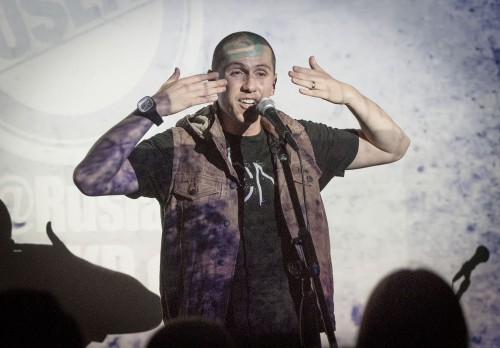 Performing at the Campus Center, Karaoglanov (whose stage name is Ruslan) charmed the audience with 10 songs for an intimate show of 40 people.

Ruslan began the show by asking audience members to hold up whatever was in their pockets, purses or satchels.

Once the audience held up their possessions, he began to freestyle about whatever it was they were holding.

“I liked how he had the crowd involved and kept it energetic,” Savannah Torres, a Charter Oak High School senior, said. “He’s very entertaining, funny and unique.”

“He had a very positive outlook and energy. I liked his perspective on things, especially his optometrist poem,” freshman psychology major Kelly Davis said.

The first poem he performed was about him wanting to be an optometrist and making a positive difference in young people’s sight.

Ruslan implied this was a metaphor for his desire to show young people a positive outlook on life.

“My favorite thing about him was the way he raps and does his poetry,” freshman liberal studies major Valerie Martinez said.

“He’s proud of who he is and what his name is and the message he wants to send,” she said.

“It seems like all the other rappers are what the media want them to be and he’s just himself,” Martinez said.

“I feel like we would do better with more people,” freshman business major Wesly Tan said. “As a performer he did well. He’s pretty funny and the delivery was good.”

Ruslan’s love for hip-hop began when he was younger.

“When I grew up in San Diego, I was exposed to an urban environment,” Ruslan said. “I instantly fell in love with the culture of hip-hop.”

“The expression of hip-hop was unique,” he said. “For every other genre you have to learn an instrument and as a kid I wanted to learn guitar but we couldn’t afford one. But we could afford a notebook and pen.”

At the age of 8, Ruslan began to cover raps and would rewrite them to create his own lyrics.

It was not until the age of 13 when he went on stage for his first performance where the rush pushed him to continue.

“I was the youngest person there but the overflow of positivity and positive reinforcement gave me the drive to get better,” he said.

Ruslan has a routine to warm himself up before a show.

“We usually pray and go over our setlist, we didn’t today though, we winged it and it turned out to be fun,” he said.

“Work hard. Music is no different than anything else, it takes a lot of discipline,” he said.