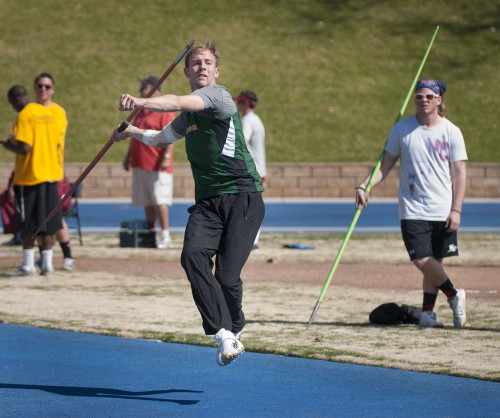 Junior Matt Rehder threw his javelin 179 feet and 5 inches, a personal record, placing him first in the javelin throw Saturday’s SCIAC Quad Meet at Pomona-Pitzer. The Leopards improved their conference standing to 2-0. The next conference track meet is March 23 at Redlands. / photo by Katherine Careaga

The track and field teams had no trouble with their Southern California Intercollegiate Ath­letic Conference opponents in the opening Quad Meet, winning 24 out of the 38 events Saturday at Pomona-Pitzer’s Strehle Track.

La Verne was competing against Occidental, Pomona-Pitzer and Chapman. Whittier was a non-scoring opponent.

Senior Lenore Moreno won the 5,000-meter race, coming in a full minute ahead of her competitors and cheered her teammates whole way as she was cooling down.

They also took first, second and third in the high jump and triple jump.

“I felt confident stepping onto the track until I set my block and I started to get butterflies,” freshman Jessica Reeves said. “I had to stay focused and once I realized I was ahead in my heat I felt confident again and in the end I ended up beating my best time of the season.”

Reeves came in first in her heat but ended up placing ninth overall in the women’s 100-meter dash.

“It was a great feeling to come in first, I have been working really hard all season,” sophomore Tanesha Spencer said. “Being a freshman last year and seeing where I need to be, so I have been putting lots of extra work, pushing myself in practice and everything that I do because its something that I have really worked hard for.”

Spencer came in first in her heat, and third overall in the 200 meter dash.

“I feel like I’m finally getting my form down for triple jump and I’m perfecting it a little better,” freshman Jacob Lopez said.

Lopez placed second in the triple jump with a total of 43-09.00, closely following his fellow teammate sophomore Jabre Millon who had a total of 44-03.25.

“Overall our team is doing very well,” freshman Jessica Reeves said. “A lot of our runners and individuals have been placing in the top three so a lot of our points are adding up.”

“It’s still the beginning of the season, so from the looks of it I think were doing really well,” sophomore Andrea Ramirez said.