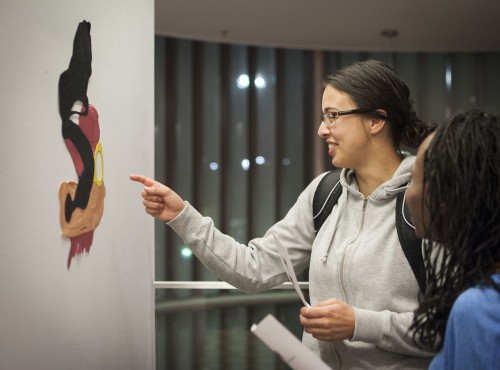 Lindsey Foster, junior communications major, and Kyaundra Davis, sophomore movement and sport science major, admire the art piece titled “Easy Rider.” The painting is part of “Colorforms,” a solo art exhibition of recent work by Los Angeles based artist, Megan Madzoeff. The exhibit will be displayed in the West Gallery, on the second floor of the Campus Center, though April 19. / photo by Kelley Maggiulli

Megan Madzoeff’s “Color­forms” art exhibit has adorned the walls on the West Gallery in the Campus Center.

The gallery is currently displaying several of Madzoeff’s art pieces, which include: “Homage,” “Tippen,” “Creep,” “Easy Rider,” “Hee Ha,” “Not Yet,” and “Executive Director.” The biggest piece in the collection is “Executive Director”, made in 2012, can be seen at the top of the staircase that leads to the second floor of the Campus Center.

Madzoeff said her artwork was named after words that popped into her head when she was done painting them.

Originally, Madzoeff brought a numerous amount of other pieces to hang, but due to the limited space only the most prominent were chosen.

The paintings were made in the artist’s studio in downtown Los Angeles and placed very carefully on the walls because each piece is delicate. Madzoeff and Charles Feesago, art department associate and curator, worked together to make each piece flow well with one another.

The team had trouble hanging “Creep,” one of the bigger pieces, because of a small inconvenience that came with the wall, which was a light switch.

“There’s actually a light switch behind (“Creep”) that we were trying to hide at the same time,” Feesago said. “So it’s like little things that don’t seem important but become a big issue when you’re trying to hang a show and try to make everything look great in the process.”

In the end the problem was fixed by flattening the light switch and one of pieces was laid over it.

Dion Johnson, galleries director, said the reason why “Colorforms” was placed in the West Gallery instead of the Harris Gallery or any other building on campus was because Madzoeff’s artwork was ideal for the space because of its style and accessibility.

“Her work being both large and small and having a really sort of colorful and quirky energy really seemed to activate that space,” Johnson said. “As a gallery director and as a curator I want to have a new presence in the space. It’s nice to replace it with something that’s loose, fluid and flowy.”

Some students at ULV first thought that the “Colorforms” exhibit was tagging or graffiti because of the freeform look it has.

“I thought it was tagging when I first saw it,” said Kolini Coleman, a freshman criminology major. “As I got closer to it, I realized that there was a name and I thought to myself no tagger would leave their name on their work. So I assumed the University did it.”

Janelle Cubong, a junior psychology major, also thought the art work was graffiti. She thought someone vandalized the school until her friend told her that it was art.

She now thinks the art work is appealing to the eye, but she wishes the art pieces would have a description of what each meant.

“It’s just nice to see,” said Michael Rashed, a sophomore political science major. “I love art. I like looking at it. It gives me something to look at instead of a white wall.

Johnson said that he has gotten phone calls mostly emails from people outside of ULV who have asked to come see Madzoeff’s exhibition.

In the future, Johnson and Feesago would like to acquire her piecework for the school, but as of right now they are happy to have her work at ULV.

Before the exhibition ends April 19, there will be a closing reception April 17 that Madzoeff will be attending. After the exhibition, student artwork will be displayed in the West Gallery.

Clo Hidalgo can be reached at clotilde.hidalgo@laverne.edu.