By Christopher Mora, Kat Simonelli on March 1, 2013 in Sports, Tennis 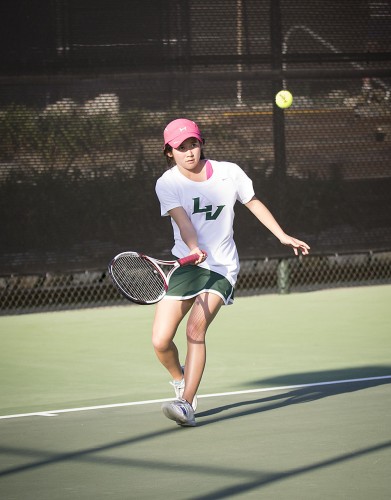 Sophomore international business major Laina Matsuda battles in her singles match Friday against Jamie Solomon of the No. 12 nationally ranked Pomona-Pitzer Sagehens. The Poway native would go on to force three sets in No. 3 singles match, but would lose, 2-6, 6-3, 4-6. / photo by Christopher Mora

The Sagehens took two out of three doubles contests early in the match, with La Verne claiming only one victory.

“Pomona-Pitzer is battling with Claremont for first, so it was a really hard match for us,” senior Ashley Broussard said.

Freshman Andrea Madrigal claimed one of the singles victories with a 1-6, 6-1, 6-1 triumph.

The other two singles matches were close, but ended up being lost late into the third set.

“All we ask is for them to try to find a way, to fight hard, and to fight with character, and that’s it,” coach Yolanda Duron said. “That’s the Leo Tennis way.”

“I still believe that my team could have beat Pomona-Pitzer. It was just some key points in some matches, but when we go back to the drawing board I am just so proud of my team,” said Duron.

La Verne will play next against Kenyon College at 1:30 p.m. March 8 at the Claremont Club.