In Bethany Wiggins’ newest novel “Stung” the bees are disappearing and crops are dying. To help, the government has been breeding bees in labs to help save the population. Unfortunately, children stung by these super bees die. If they get vaccinated against the stings they end up turning to violent, killer beasts. Sounds like a good time right? 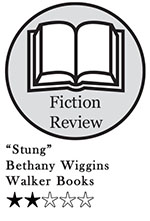 This book is one that readers will either love or hate. The main plot is similar to Hunger Games with its post-society structure. However, the convenient circumstances the character faces and the simple love story comes off as cheesy.

The story is interesting if readers just focus on the downfall of the human race instead of focusing on the main character. If read with that in mind, the development of the story and the twists Wiggins takes are exciting.

The only background the reader is given at the opening is the hazy memories of a coma patient. Waking up in the remains of her old home, an anonymous female character, later named Fiona, describes the dried out and moldy furniture that remains in her rotting bedroom. No years are given outright but it is understood that the story is set sometime in the future.

It is not until later that we find out exactly what happened to our narrator, and from then on the pace in the story picks up. As she shakes off the after affects of her coma we are introduced to the story’s main obstacle. The narrator is attacked by a beast and realizes that the dark, demented eyes she is staring into is her twin brother’s. Immediately showing the reader the effects of this vaccine.

As the twisted tale of an antidote gone wrong unfolded, it was easy to get sucked in to this post-apocalyptic hierarchy.

There are four different levels that people live by: inside the wall, soldier, outside the wall and Fec. While the first three are self-explanatory, the Fec definition was disgusting to learn about. Basically, these people hide in sewers and crawl around in fecal matter that has been dry and curdling for nearly eight years. Since the main character uses the sewer quite often in the story, the described sound will be burned into memory. The Fecs hang onto life as best as they are able. While it reads as a people that should be pitied, they are all killers if threatened. Trying to decide between trusting someone Fiona interacts with or screaming for her to run away is a tug-of-war.

Now while the vaccine back story is enjoyable, there are a few parts of the writing that could cause people to cringe. In the first chapter as Fiona is running away from her brother, there is a scene where she jumps out of a second story window onto a magical trampoline that she just randomly decides to mention. Instead of having Fiona mention that she saw the trampoline and thought she could make it, she just lands and says that her mom bought it.

There are a couple instances where there is a chance people will feel things are a little too convenient and will have to force a suspension of reality, but for the most part these can be ignored so the plot is still good.

One detail that is really interesting in the story is the description of the tattoo that covers the hands of people who were vaccinated. It is a black oval that can have anywhere between one to ten legs coming out of the side resembling some sort of twisted spider.

About halfway through, someone finally tells the audience why the legs are significant and applause has to be awarded to the author for this clever way of identifying danger. Basically the more legs on the oval, the worse a person will be treated if they are caught by a soldier.

The biggest issue with “Stung” is the love story. While the childhood friends reconnected is a good launching block, it comes off as cheesy when they actually try to voice their affection for one another.

Both characters are 17, which is restated a couple times in the story so their perception of “love” is set-up as immature. It is rough and seems more for convenience than actual love.

However, in a world where there are about 15 men to every one woman it isn’t hard to imagine there is time for romance.

What the reader is faced with is something that every young adult novel suffers from. If the characters are not in love by the end then they are forever alone.

If you can suspend disbelief and look at the big picture of Fiona’s adventure then the world that Wiggins created for her characters is something to be noted. Since there is no society, honey is more valuable than a $100 bill. All the luxuries that people take for granted are killed for and no one can say no when something as simple as crackers are on the line. The beasts are terrifying yet you feel sympathy for them as the author teases readers with the back-story of how these creatures developed and it can keep eyes moving across the page.

Details unfold as you advance and of course ties in with Fiona’s rediscovering of her past. Besides a few hitches, the book makes for a good distracting read.

Amazon carries “Stung” for $9.99 for the kindle edition and has Hardcover copies starting at $12. The hardcover is also available at Barnes and Noble for $12.04 and $10.43 for the Nook edition.