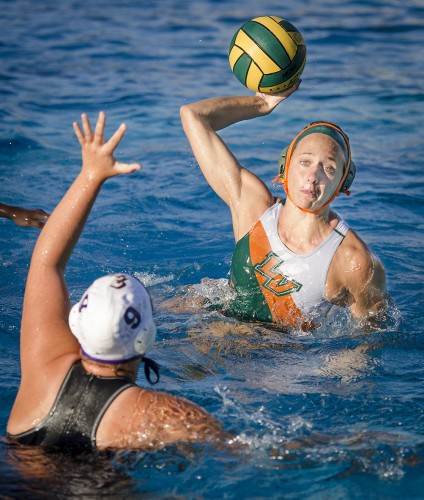 Sophomore defender Maddie Lovrensky rips a shot over Cal Lutheran freshman attacker Morgan Cook during the SCIAC contest held at Las Flores Park April 17 in La Verne. The Regals shot down the Leopards, 13-2. The water polo team finishes its season with a SCIAC record of 1-7 and an overall record of 11-21. La Verne begins SCIAC tournament play at 1 p.m. Friday against Caltech in Pasadena. The tournament will continue through the weekend. / photo by Zachary Horton

Now the Leopards will head into the SCIAC championships with a ninth place record of 1-7 in SCIAC and 11-21 overall.

“I think we need more teamwork,” head coach Alex La said. “We needed more communication, and we’re going to focus on that.”

The Regals started off hot in the first quarter with a goal from center Shannon Streeter. Cal Lutheran would have scored another three goals, but Leopards senior goalkeeper Lauren Shepard saved the shots.

In the second quarter, the Leopards’ junior attacker Stephanie Tuning scored, tying up the game. The Regals answered back with a goal of their own from attacker Skylar Vasquez.

The Regals scored two more goals before the end of the quarter, making the score 4-1.

“I think we struggled mainly offensively,” Tuning said. “I think we could’ve slowed it down, and made better passes. We really need to review everything before the championships next weekend”

The Regals dominated in the third quarter scoring seven goals in eight minutes. The Regals had outstanding offense, but had a very strong defensive effort by their senior goalkeeper Kylee Tomasetti stealing the ball seven times throughout the game.

Going into the third, the score was 11-1 Cal Lutheran. Leopards’ junior center Melissa Pryor was able to score a goal in the fourth.

However, the Regals strong defense forced the ball out of the Leopards possession, and they scored two more goals.

Shepard had a great performance for the Leopards, saving nine goal attempts overall. The Regals had strong defense by sophomore defender Adrienne Ingalla, who had six steals.

“We just couldn’t put away our shots,” Shepard said. “There was a lot of cherry picking instead of playing better defense. I think we’ll focus on more offensive plays going into next week.”

The Leopards will focus on offensive strategies going into the SCIAC championships, according to La.

“We need to build more confidence,” Shepard said. “It’s all about what we do in the pool, not what the other team does.”

The water polo team will play in the SCIAC champion­ships on Friday, and depending on their success, will advance to the next round April 27 and 28.