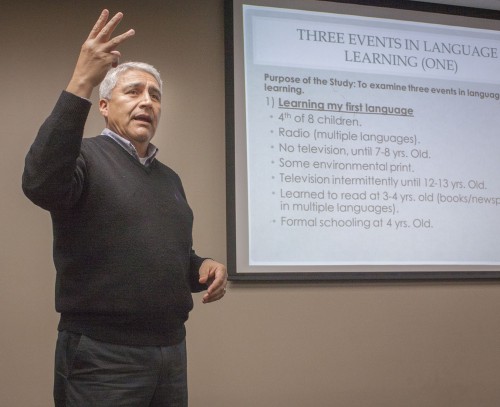 For his lecture “Language Immersion: Psychological Implications,” Justin Saldana, associate professor of education, spoke about immersing himself in French language when he traveled to France during his Sabbatical last year. Saldana, who is originally from Mexico, told his audience that immersion is the best way to learn a foreign language. / photo by Stephanie Ball

Monday’s faculty lecture featured Justin Saldana’s presentation “Language Immersion: Psychosocial Implications,” based on the associate professor of education’s sabbatical project of traveling to France to study the language there and compare it to how immigrant students here learn English.

His lecture also looked at people who acquire a second language and how it’s different from learning their first language.

It is “sink or swim” when immigrant children who don’t speak English come to America and enter the educational system, Saldana said. He recalled his own experience coming to the United States.

“I was very motivated to learn English because I wanted to fit in,” Saldana said.

He said that in our system these children are thrown into classes where no one speaks their language and they still have to keep up with the academic standards.

He said that the first time he was exposed to English was in school in Mexico when he took a class – just one period a day.

“I didn’t learn anything,” Saldana said.

Then when his parents moved to the United States he was thrown into the “sink or swim” high school educational system and had learn it to succeed in school.

The European Union’s language policy states that their goal is to get people to speak two languages other then their own, while California’s language policy is that English learners must become proficient in English.

“We are a little bit challenged on how we teach foreign language,” Saldana said.

Saldana said when he went to France he was at “level one,” according to an assessment he took, and after one month of study he moved to level two.

He said that there were four steps to learning a language: listening, speaking, reading and writing.

“(Saldana’s talk) was very informative,” Associate Profes­sor of Edu­cation Ingrid Baartman said. “Especially since in education we see how students need a teaching style that works.”

Baartman said the lecture spoke to her because English is also her second language.