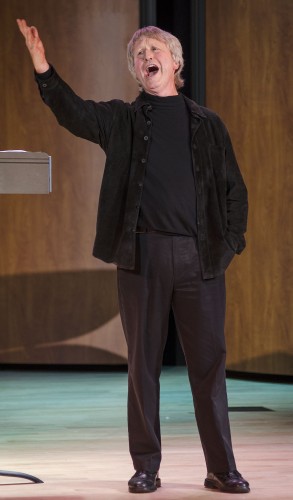 Tenor Jonathan Mack performs in Morgan Auditorium Sunday with Grace Xia Zhao providing piano accompaniment. Mack has also performed at the University of Southern California and Chapman University, among other venues across the nation. / photo by Zachary Horton

Before the performance, Mack emphasized the informality of the recital. He and Stephenson explained the history of each piece before it was performed.

The opening piece was “Ye Beauties of the Town” from the oratorio “The Seasons” by Austrian composer Haydn.

Mack described the song to have a “clog dance kind of rhythm.”

Mack and Stephenson, playing boyfriend and girlfriend, maintained eye contact during the reverberating final note of the duet.

The second section of the recital paid homage to German composer Schumann.

“Aus alten Märchen,” which Mack sang as a solo, is from the song cycle “Dichterliebe,” and it describes the bewildering fairytale forests.

The second Schumann piece, “Widmung,” sung by Stephen­son, is a love song that proclaims, “You are my life, my better half.”

The Schumann section concluded with a duet, “Die tausend Grüsse,” a “fast and furious” love song that Mack described as “risqué.”

Schumann is known for his tough, detailed piano accompaniments.

The third and final section of the recital was dedicated to the works of English composer Britten.

Stephenson began with the evocative “There’s None to Soothe.”

The mood shifted afterwards with the melodic and happy “The Brisk Young Widow” performed by Mack.

The final piece, “Canticle II: Abraham and Isaac,” recounted the tale of God summoning Abraham to sacrifice his only son, Isaac.

Mack and Stephenson both sang as God in the beginning of the piece.

They faced each other while singing, the placement enhancing their harmonies into perfect unison.

In the second part of the piece, with Mack as Abraham and Stephenson as Isaac, the two portrayed their parts dramatically.

Stephenson even changed out of her skirt and into pants to play Isaac.

“This is the opposite of a diva,” she said after Mack playfully noted her costume change.

“Canticle II” was a crowd favorite.

At the end of the recital, Mack, Stephenson and Zhao surprised the audience with another Britten piece, “Oliver Cromwell,” a brisk and vibrant folk song that left the audience laughing.

Carl Bergquist-DeVoe, La Verne resident and piano instructor, enjoyed the recital, especially since he has previously performed “The Seasons.”

“It was exciting to hear it be performed,” Bergquist-DeVoe said.

Stephenson and Mack collaborated after Mack suggested they have a duet performance of Schumann.

The two decided to add Britten to the repertoire to celebrate his 100th birthday.

Professor of Biology Jeff Burkhart, who attended the concert, said he enjoyed the narrations because it provided a background to audience members who may not know a lot about the classical genre.

“I love how we have the opportunity to come to these quality performances,” Judy Bergquist-DeVoe said.