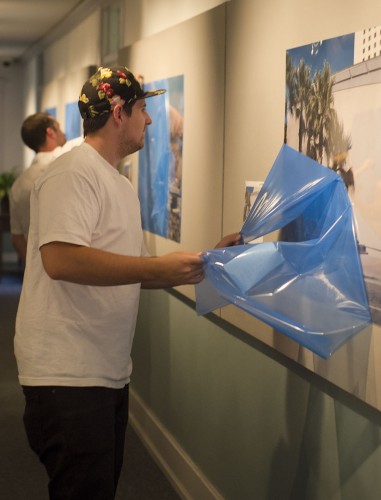 Junior photography major Hunter Cole peels plastic off the latest installation in the Carlson Gallery, called “Geoloca­tion: Desertscapes,” by photographers Nate Larson and Marni Shindelman. The gallery will hold a reception at 6 p.m. Thursday at which photographers will be available to talk via video chat. / photo by Mitchell Aleman

One of the most popular social media outlets used by people of all ages today is Twitter, but what most of us often forget is that we are publicly embedding our GPS information with every tweet we send.

The photographers decided to take a new outlook on this social media source through their work.

Each photograph is taken on the site of the update and then paired up along with the original post made by the user.

“It’s kind of cool to see a picture put with a text, you get a chance to possibly see where the person was when they sent that specific tweet,” junior broadcast major Raven Freret said.

Larson and Shindelman believe that their act of making a photo captures a moment in time. They combine online data and real world materials. Their work is meant to give insight on how the world’s expectations of privacy regarding social networks are not as private as we may think.

“I never really thought about the fact that my tweets can show anyone where I’ve been, it is actually kind of bizarre when I think of it, that somebody could go to the same place I tweeted and put an image to my words,” junior movement and sports science major Laura Olson said.

The pair selected random texts that revealed something about the user in a personal way regarding their personal lives or their national climate.

“The things we make out of the elements of a picture occur in part by chance and in part by motivation inspiration from something else that already happened,” Professor of Photography Gary Colby said.

In one particular photograph there is a landscape pictured of a wall with a house behind it and in the distance is the terrain of mountains and wind energy windmills.

The twitter post that the photographers identified with said, “He don’t kno y im hurt but its all over his twitter!!!! Y do I still carry hope?”

The pair wanted the photographs to examine the relationship between physical space and the ways it was influenced on an online presence.

“The passing phenomenon of Twitter is a moment in our technological history that will probably be brief,” Colby said. “And not unlike the gravity with which we pass the locations in these photographs without the thought of consequence and merge to someone, in that moment their location on the planet was encoded to the communication, in this case to two photographers.”

Associate Professor if Theater Arts Sean Dillon and Assistant Professor of Mathematics Gail Tang each wrote a reflection paper on the photography exhibit.

Dillon hits key points on distance: between the hearts and minds of people, between aspirant and goal, between points in time, and even between caption and content.

In the same photograph of the block wall with the terrain in the distance, Dillon questions what this has in relation to the tweet that was sent at that location, he asks if we are meant to be tantalized by what lies beyond the wall?

In Tang’s paper she describes the photographs as banal as the tweets are themselves. She believes that the creative quality in the photos do not lie in them alone, but in their unique ability to capture the audience in a different way that makes us question the world around us.

“It seems like maybe the environment had an effect as to why the people tweeted what they did and then again maybe it didn’t at all,” Freret said. “It’s all so interesting and makes you really think about how the places, feelings and things around you make you feel.”