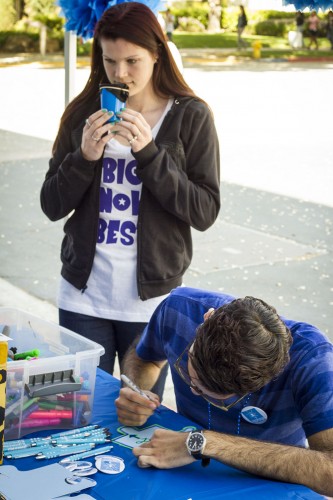 Senior English major Ally Schultz and senior public relations major Anthony Juarez participate in the activities at the Order of Omega’s booth on Tuesday in front of the Campus Center. April is Autism Awareness Month, and in honor of the month, Order of Omega hosted its annual Autism Speaks: Light it up Blue event, from Tuesday to Thursday. / photo by Ryan Gann

Laughter boomed out of the Morgan Auditorium Wednesday night as the University of La Verne welcomed comedian Shang Forbes.

“I had to go through a magical fog to get here,” Forbes said. “I did not know this was here – this is the type of place you Mapquest and even Mapquest goes…uhh.”

Forbes was brought to La Verne by Order of Omega as part of its annual Light it Up Blue event for Autism Awareness.

He had to improvise most of his set due to the show’s late start because of technical difficulties but still managed to have the audience members shaking with laughter.

His set proved edgy and risqué as he picked on audience members and said lines that left the ecstatic crowd with shocked faces.

“The show was super dope and I would see him again if he did another show,” Jade Kelley, junior public affairs major said. “It was straight up, raw, edgy, and really funny.”

Senior communications major Cindy Vallejo teamed up with Order of the Omega to put on the weeklong event as part of her senior project.

“I was inspired by ‘Extreme Makeover’ where they did something similar for one of the boys who was autistic and lit up the whole city in blue for him,” Vallejo said.

“Since a lot of the students and faculty have family members who have autism, I thought that it would be a great organization to do something for,” she said.

“It took a lot of preparation for the event and I needed man power to put everything together,” Vallejo said.

“Order of the Omega members came right in and helped me put together this successful event,” she said.

Senior English and speech communications major, Brittany Martinez, was one of the members who aided Vallejo.

“Many people were affected,” Martinez said. “We had people coming up to us saying that they had family members who were autistic and that they really appreciate what we were doing.”

The events spanned from Tuesday and continued until Thursday.

The first two days included booths with activities ranging from a smelling contest to a puzzle decorating area and more information about autism.

Davenport was also dipped in blue Tuesday night, as a “Blue Menu” with items like blue pancakes and cheeseburgers that were served to students.

“Bon Appétit worked with us to make the event very successful,” Vallejo said.

Blue balloons dotted the campus with attached facts about autism where Vallejo hoped students would learn more about autism on their way to class.

“Autism is one of the fastest growing disorders and we wanted to make sure that we brought awareness to the cause,” Vallejo said.

A fundraiser was also held on Thursday at Granny’s Yogurt where all the proceeds went to the Autism Society.

“I really wanted to advocate for autism because it is one of the disorders that is less recognized with low sponsorship,” Vallejo said. “My goal was to spread the word and awareness and make everyone go blue for the month of April.”

Monica Dien can be reached at monica.dien@laverne.edu.

NBA needs to rethink homage
Pizza with the President