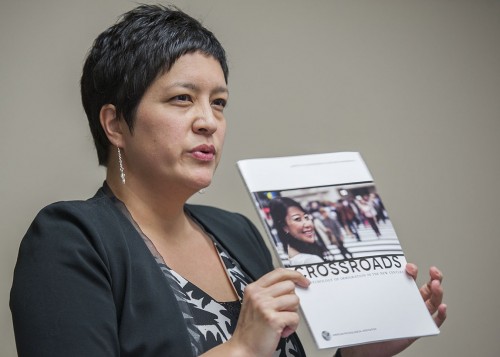 Assistant Professor of Psychology Nadine Nakamura presented “Examining the Psychological Impact of Immigration on Diverse Immigrant Populations,” for the faculty lecture series Monday. During her talk Nakamura discussed the report “Crossroads: The Psychology of Immigration in the New Century,” which she co-wrote with the other five members of the 2011 American Psychological Association’s Presidential Task Force on Immigration. / photo by Hunter Cole

Nadine Nakamura, assistant professor of psychology, presented “Examining the Psycho­logical Impact of Immigration on Diverse Immigrant Popula­tions” at noon Monday in the President’s Dining Room as part of the faculty lecture series.

Her lecture focused on the struggles same-sex couples in Canada face after one of them is denied citizenship in the United States.

For the project she studied 17 participants between the ages of 30 and 56 who had immigrated to Vancouver, British Col­umbia, from the United States.

Approximately 12 percent of same-sex couples in the United States have a partner who is not an American citizen.

There is no way of knowing how many people have left the United States to stay with their partners because no one has tracked that information, Nakamura said.

Like other immigrants, some same-sex immigrant couples experience mental health problems such as depression, anxiety and substance abuse.

“I thought it was interesting,” said senior psychology major Cristobal Gutierrez, who attended the lecture. “It had personal connections because my parents are immigrants.”

“What was impressive was that she was invited by the APA and other high level scholars to participate in the project,” Jonathan Reed, dean of the College of Arts and Sciences, said.

Nakamura’s research will be published in May in the Journal of LGBT Issues in Counseling.

She would also like to look at the effects forced immigration has on the children of LGBT couples.