By Christopher Mora, Kat Simonelli on April 26, 2013 in Baseball, Sports 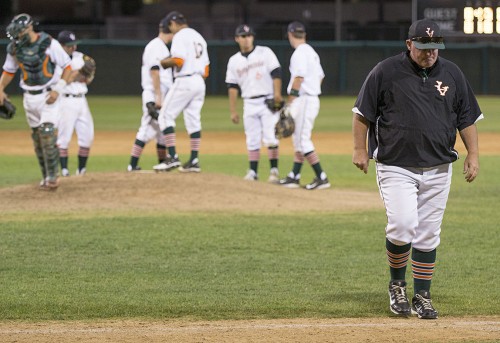 Head coach Scott Winterburn leaves a meeting at the mound during Friday’s loss to Cal Lutheran. Led by starting pitcher Jake Petersen, the Kingsmen held the Leopards to one run and won, 5-1. Cal Lutheran extended its winning streak to 12 games and clinched the top seed heading into the SCIAC tournament. The Leopards dropped to fifth place in standings and will have win their four game remaining games to qualify for the tournament, which begins May 3. / photo by Christopher Mora

In game one, Cal Lutheran started the second inning with a 4-0 lead. After the first two batters reached, the Kingsmen would hit four consecutive singles.

La Verne was able to come back with their only run of the game in the bottom of the second inning with an RBI single by sophomore third baseman Jared Hovsepian.

“When I came into the game on Friday night I went out there and just tried my best to do my job, which was to throw strikes,” senior pitcher Brandon Montalvo said. “I knew if I just believed in my pitches and just competed in the strike zone I’d help my team out and give them a chance to come back and tie or win the game in the bottom of the ninth.”

Cal Lutheran would add one more run in the top of the eighth inning, finishing the game 5-1.

“The problem this year on the team is finishing off the other team,” freshman pitcher Brett Early said. “Our offense hasn’t clicked to where we can put other teams away yet.”

The Leopards went into the next day’s doubleheader in Thousand Oaks looking for a win, but couldn’t get the big hit.

On Saturday, Cal Lutheran started game one with an early 2-0 lead with an RBI single to left field by sophomore catcher Spencer Dubois.

After one more Cal Lutheran run, the Leopards would tack on two runs in the bottom of the sixth to cut the lead to one, but it would not be enough for the win.

“Our pitchers kept us in the games, and we had poor at bats when it mattered with runners in scoring position,” senior third baseman Mason Stoltenberg said.

“This weekend our team just wasn’t able to execute in key situations,” freshman pitcher Alec Garcia said. “Our offensive was struggling through the whole series with runners on and we never really came through.”

“The team started out pretty well this year, but recently we’ve struggled and fallen in the standings,” freshman outfielder Ben White said. “Hopefully we can make up enough ground this week to get into the SCIAC tournament”

“We have been struggling recently having lost a few games we just need to get back on track and believe in our abilities,” sophomore pitcher Sean Beckman said.

Head coach Scott Winterburn said that he feels the playoffs have already begun for the Leopards because every game until the end of the season is a must win.

“I expect that with our last four games we win each of them,” senior first baseman Michael Stewart said. “We just need to come out ready to play and compete as if we have nothing to lose.”

The Leopards will play a four games this week, starting Saturday with a doubleheader at Rio Hondo College against Claremont-Mudd-Scripps at 11 a.m. and Cal Lutheran at 3 p.m. The team will then travel to Pomona-Pitzer at 11 a.m. Sunday. A game at Whitter at 3 p.m. Tuesday will conclude their Southern California Inter­collegiate Athletic Conference play for the season.

“It’s ironic that we’re playing (Cal Lutheran) again the next week,” Winterburn said. “Maybe there will be some more familiarity. Maybe we can take some confidence in the fact that it’s hard to beat the same team four times in one year.”

“Since we lost three, it kind of feels like the odds are clicking in our favor. Either way we know what we need to do this weekend.”