By Christian Garay, Stephanie Ball on April 26, 2013 in Softball, Sports 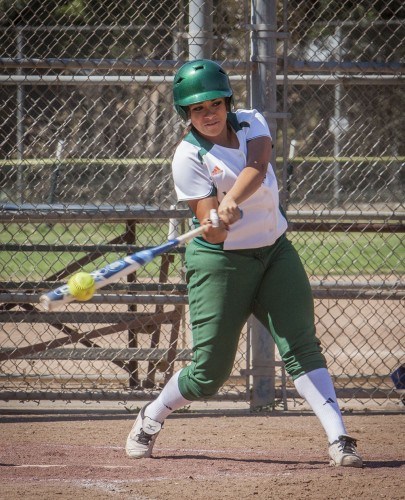 Junior communications major Candice Nuñez went to bat at the bottom of the second inning against Pomona-Pitzer, where she hit a single. La Verne won both games in their double-header home game at Wheeler Park on April 19, trouncing the Sagehens on their senior day. / photo by Stephanie Ball

The softball team earned its spot in the Southern California Intercollegiate Athletic Con­ference Postseason Tournament by winning a doubleheader over Pomona-Pitzer April 19 at Wheeler Park.

Before the game, the Leopards honored their only senior Amanda Copas as part of the Senior Day festivities.

The Leopards clinched fourth place in the league standings for the right to play in next weekend’s conference tournament.

The Leopards got on the board at the start of the first game with a two-run homer by Raven Freret over the right field fence in the bottom of the first to give the team a 2-0 lead.

The momentum was high until the Sagehens got a run in the top of the second bringing the score to 2-1. La Verne stretched its lead to 5-1 because of three hits from Danielle Vega, Katherine Kibbe Candice Nunez and an opposing team error in the bottom of the third.

Freret, who finished 3-4 at the dish, scored an RBI single in the bottom of the sixth to complete the scoring for the game.

“It felt good, we came out and did what we needed to do,” Kibbe, an undeclared freshman major, said. “We could have made better adjustments on bat though.”

The second game started off a lot different than the first did with both teams scoring twice in just the first inning. That was until Vega walked with bases loaded, bringing the game to 3-2.

The game was scoreless almost the whole time after until the top of the seventh when the Sagehens’ Paige Oliver hit a double to reach second base. Luckily for the Leos Rachel Hong would end the scare by striking out Stephanie Boden to end the game.

Kibbe pitched the first inning, while Rachel Hong pitched the second to win the game for La Verne. Hong only allowed six hits in her seven innings of work.

“I’m very happy, I think Katy did a great job on the mound,” Smith said. “We started off slow but shut them down in the end.”

The Leopards finish the season with an overall record of 24-14, and a record of 16-12 in SCIAC play.

With their fourth place finish, La Verne joins Redlands, Chapman and Claremont in the SCIAC tournament.

The tournament begins at 9 a.m. today against Redlands on the road.

“Well we are very excited because we made it to the tournament and the coaches will prepare us. and we are going to give it our all,” said freshman business administrations major Jessica Morales. “I’m looking forward to finishing off strong and making it regionals.”