By Christopher Mora, Kat Simonelli on April 12, 2013 in Softball, Sports 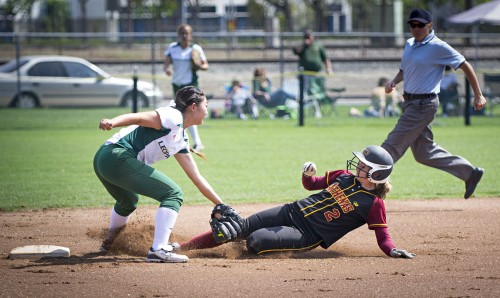 Sophomore Rachel Hong tags out Athena Harmony Palmer as the softball team dropped both games in Saturday’s doubleheader against Chapman and Claremont-Mudd-Scripps at Wheeler Park. The Leopards gave up a total of 17 runs and were held to only three runs in both games. The losses puts the Leopards at 19-13 on the year and 11-11 in SCIAC play. / photo by Christopher Mora

The softball team played consecutive doubleheaders April 5 and 6 against Chapman and Claremont-Mudd-Scripps.

During their first day of games against Chapman, La Verne lost game one 5-2 in the eight innings, and lost the second 6-0 in 11 innings.

“To go nine innings in the first game and not be able to score, and to leave the scoring run at third twice, and then to come back to a dog fight in the eleventh inning was heart breaking,” pitching coach Rose Rogers said.

Before scoring in the second game against Claremont, La Verne went 23 innings without a run.

A very frustrated head coach Julie Smith was annoyed with some of the calls made by the umpire, and she responded by banging her clipboard against the fence and loudly challenging his judgment.

“I’m not happy about our performance, I’m disappointed,” Julie Smith said. “Our team gave an F effort for the whole weekend.”

Even though La Verne lost, the games still had some high points.

In the bottom of the fifth inning of the second game against CMS, third baseman Mackenzie Dutton hit a solo home run over the left field fence.

“The work ethic is there and the talent is there, but it’s a lack of consistency that takes us out of the rhythm,” Rogers said.

“This weekend was a disappointment,” junior catcher Jacklyn Duran said. “I know we are so much better, but failure is something we have to learn from.”

“It was very tiring playing back to back doubleheaders, but that’s how it’s going to be for the rest of the month so we have to get used to it,” left fielder Amanda Copas said.

La Verne will play another two days of doubleheaders starting at 2 p.m. Friday against Occidental, and at noon Saturday against Whittier.