By Mariela Patron, Zachary Horton on May 17, 2013 in Community News, News 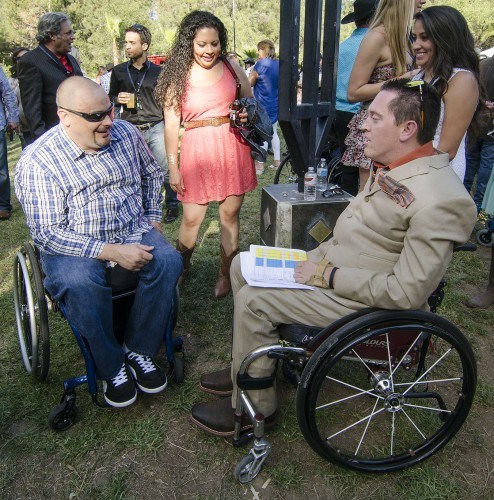 Hal Hargrave, founder of the Be Perfect Foundation greets guest Robert Tyler as he enters the fifth annual Be Perfect Foundation fundraiser, “These Boots are Made for Walking,” Saturday. The event, located at the Hafif Estate in northern La Verne, featured a silent and live auction, dinner and a special guest performance by the Silverados. / photo by Zachary Horton

In a night filled with country music and country attire, the Be Perfect Foundation, founded by junior communications major Hal Hargrave, brought awareness and donations to spinal cord injury survivors.

Around 1,200 donors and benefactors joined Be Perfect’s fifth annual fundraiser called “These Boots are Made for Walking,” at the Hafif Estate Amphitheater in La Verne on Saturday.

“This is my release,” said Hargrave who suffered a spinal cord injury himself in 2007 and uses a wheel chair. “I feel like it’s part of my mission.”

For the ticket price of $125, donors were guaranteed a table with a three-course meal.

The event raised more than $300,000, bringing the foundation’s total to more than $2 million raised.

The event commemorated the difference Be Perfect has made in a video where spinal cord injury patients retold the story of their accidents and explained how the foundation has helped them financially in their recovery.

The video moved some audience members to tears.

Brigitte Epstin was there to support her 6-year-old grandson Johnathon Williams, who at the age of 2 became unable to walk after a viral infection hit his spine. Williams went through rehabilitation at the Project Walk Claremont, which is a gym started by Hargrave to help disabled patients have a place to work out and improve their chances of walking again.

For Lauren Moore, it was the first time attending the fundraiser to support Hargrave, who she has known since high school.

“A lot of spinal cord patients don’t get a lot of recognition,” Moore said.

In 2007, Hargrave lost control of the truck he was driving; the accident left him paralyzed from the neck down, though he has since regained some control over his arms and hands.

He founded the Be Perfect foundation after he noticed many spinal cord injury patients were not able to afford the costs for their continued rehabilitation and recovery.

“It’s something that’s become part of my life,” Hargrave said.

Throughout the evening attendees were able to bid in a silent auction on memorabilia ranging from autographed movie posters to collectible baseball cards.

Erika Eckley bid on a two-night stay at the Double Tree hotel. She has attended the Be Perfect fundraisers before.

This is the first year the annual fundraiser had a theme; the idea came from Hargrave’s love of country music.

“I’m very much a cowboy myself,” he said. “We hope people would be able to put those boots on and do a little line dancing.”

The night ended with music from the Silverados.

“We hope at the end of day we can reassure our donors,” Hargrave said. “It’s all attributed to the help we get.”