Imagine waking up, getting ready for class, leaving your home and seeing the letters S-L-U-T written all over your car. In Chelsea Pitcher’s story in “The S-Word,” this is a reality for a 17-year-old girl. 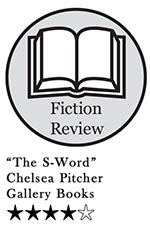 The story follows similar coming-of-age stories that take place in high school. The feeling of “tiers” of popularity shares the same kind of structure as “Mean Girls” minus the focus on destroying “the plastics.”

Like books before it, the story demonstrates the tiers by identifying sexuality, extracurricular activities and interests. However, rather than focusing on the climb to popularity, we witness the voluntary fall of one of the high school’s most popular girls.

The book touches on some sensitive topics such as bullying, confrontations and suicide and does a great job of looking at each situation carefully and breaking up tension with either romance or comic relief. The story is a great way to show examples of what high school has become for some students and how they should and should not handle the situation.

The narrative follows Angie in her final semester as a high school student. She and her best friend, Lizzie, are inseparable and often talk about going to the same college to maintain their friendship.

They both only see being together after high school as the only future they need.

That is before Lizzie sleeps with Angie’s boyfriend, Drake, at prom. Angie shuns Lizzie and allows the cruelty of gossip and high school students to take revenge.

Lizzie is plagued by the word “slut” being written, carved and spat at her every day for a week after prom until eventually she kills herself.

Now, with only about two weeks left of high school Angie’s world is falling apart. She stops being the stereotypical cheerleader, dyes her hair black, dresses in drab clothes and cuts all ties with the popular girls she once called her friends. She spends every second of her free time trying to piece together what happened to her best friend.

While placing some blame on herself, Angie sets out to make sure that she finds out exactly who else is responsible and what else could have lead to Lizzie’s suicide.

Naming her book “The S-word” was a clever move. At first the only “s-word” that is paid any attention to is “slut” but as Angie goes back in Lizzie’s timeline the story slowly shifts to the word being “suicide.”

This is when the true meaning of the book seems to be unveiled. Yes, high school students can be cruel when they are in a mob. Yes, readers are treated to the hierarchy that is formed in high school and what it means to be “popular.”

But the book addresses a topic that only recently came to the front of everyone’s mind — when people commit suicide, there is a real reason.

After Lizzie’s death someone takes it upon himself or herself to post copies of her diary pages along the walls of the high school and write, in her pretty handwriting, “suicide slut” over Lizzie’s locker.

The passages give Angie a small peak into what it was like in Lizzie’s mind as she went from happy to completely depressed in less than a week.

The passages all seem to be written to a specific person that Lizzie was harboring feelings for but it is not until the end of the book that it is revealed who she is referring to.

This secret romance plays a key-role in Lizzie’s embarrassment over being caught with Drake.

Now while the overarching story is Angie’s investigation, there are several side stories going on as well. Drake is still pursing Angie after being caught with her friend; Angie is doing her best to keep up appearances with the popular girls of the school and, eventually, Angie has a small romance that saves her from following Lizzie’s example.

There is a lot to keep track of but the entwining of all of these stories together is done in a realistic way that keeps the story believable and stays away from the cheesy disaster it could have been.

Angie being a main character made sense for the story. If Pitcher had opted for third person there would not have been as strong as an emotional tug.

Through Angie’s eyes we can see the pain that the friends and family of suicide victims go through.

We also observe the uncomfortable shift of conversation when it is brought up in front of people not willing to deal with the topic.

The secondary character that comes into play is a boy named Jesse. He was one of Lizzie’s friends till the bitter end and also one of the most ridiculed in school.

Jesse wears a dresses, skirts, vests and dress shirts to school; this makes him the target of almost everyone the interacts with him. As soon as readers are introduced to Jesse the only word used to describe his personality is “gay.”

He is dismissed quickly by many and pursued by the head cheerleader of the school to be her best friend.

Angie’s interaction with him builds an almost Pinnochio and Jiminy Cricket relationship. As she tells him her discoveries and theories about Lizzie’s death, he gives feedback and tries to keep her levelheaded.

Angie also ends up getting a crush on Jesse over time since he is the only one that reaches out to her during her personal downward spiral.

Jesse is an effective moral character and demonstrates the emotional tug-of-war that Angie is facing as she tries to hang onto her memory of Lizzie and move on with her own life.

Now even though she dies at the opening of the book Lizzie also plays a key importance to the development of the story. Lizzie is described as a “fairy” and how she is this pure being in Angie’s eyes. She was raised by her single father who is a devote catholic and keeps her on a short leash.

Lizzie is a “safe-rebel” and will only go against what her father believes when she knows that she will not get caught. Lizzie represents a sort of innocence in the story and even though she is smeared through the opening of the book, her true personality is revealed in Angie’s hunt for answers.

The theme boils down to this: Forgive when you can and do not judge based on one mistake.

The true story of what happened to Lizzie on prom night is revealed slowly. From her leaving the dance floor to Angie walking in on her and Drake, there is more of a back-story.

As the book progresses there are constant reminders that there is more to the story than the gossip floating around school. Hopefully readers will keep an open-mind while trying to unravel all of the pieces.

Once the story reaches its climax, it might be surprising to discover who is behind it all. Of all of the people that Angie interrogates the answer reveals itself in an unlikely way. The story is an interesting take on finding the roots that lead to a person’s suicide.

The one hint that can be given is yes there was a spark that pushed Lizzie over the edge. It is hard to accept but there is a “life goes on” tone near the end of the book that is suppose to offer some small comfort but only does the job of sealing off Angie’s hatred for herself.

One thing that is appreciated with the story is that there is not really a happy ending with the characters. Angie’s crush on Jesse pulls her out of her depression while her investigation helps her get out of her guilt she feels over Lizzie’s death.

However, there is no great riding off into the sunset for Angie.

She feels better, but only enough to hint at recovering from losing someone she cared about. Real experiences leak through instead of everything being completely OK in the end of the story.

Hopefully readers will take a minute to read through “The S-Word” and reflect on their own beliefs on the situations that come up in the book.

The story goes deep but keeps readers’ heads just enough above the water to where they will not get lost in the sad situation that Angie is determined to go deeper.

Critical readers will enjoy the thoughts the story brings up rather than feeling as if they are being pushed away.

Chelsea Pitcher’s “The S-Word” is available for $7.61 on the Kindle, $8 on the Nook. Both Barnes and Noble and Amazon carry “The S-Word” for $9 paperback.