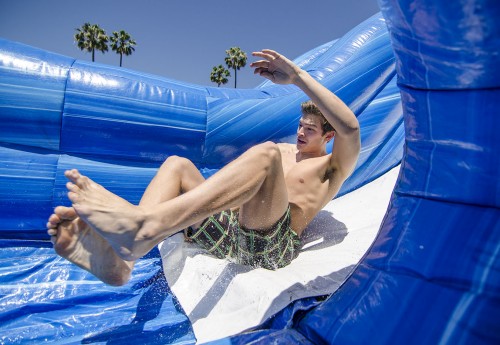 Freshman kinesiology major Andrew Phillips prepares for impact at ASULV’s Soakfest on Tuesday. The event included two water slides, a water gun battle area, a foam pit, and a watermelon-eating contest. With temperatures rising above 90 degrees on Tuesday, the third annual Soakfest could not have happened at a better time. Food was also provided via food trucks and prizes were given away. / photo by Zachary Horton

Summer was in full swing a students migrated towards the large inflatable water slide and foam pit that was placed in the South Quad behind Campus Center on Tuesday.

With the weather at a high of 90 degrees, large groups of students flocked to the grassy area to enjoy a day filled with water activities, food trucks, free prizes, and a chance to escape from the stress of finals week approaching.

“We had to initially reschedule the event that was planned for last Thursday because of the bad weather, but I’m really glad we did because it ended up being perfect weather,” senior speech communications major Brittany Martinez said.

Martinez, who is also CAB co-chairwoman of major events, was ready and prepared to put her spin on the annual Soakfest event and top the year before.

CAB wanted more participation in the water activities this year so they decided to rent out a few fun water filled inflatable jumpers for students to splash around.

The crowd favorite was the huge double-sided water slide that ended in a small pool.

Students were able to race one another down the water slide in hopes of being the first one to the bottom.

Another was a large foam pit complete with huge amounts of bubbles that students jumped and ran around in, going in completely dry and coming out covered in all white and looking sudsy.

The last water activity was a huge version of a childhood favorite, the slip-n-slide.

Students could not get enough of racing against each other down the slippery water inflatable, even some of the Leopard athletic strength and conditioning coaches had their fun trying out the slip-n-slide.

CAB also created a small area where students could chase each other around with water guns while staying safe so they could have the complete Soakfest experience.

“I liked the fact that they had more than one water activity this year compared to the previous years, this year was definitely the best one,” senior sociology major Christine Camacho said.

When students worked up an appetite from all the water fun, long lines stretched across the courtyard where they waited patiently to be treated to two food trucks, the Greasy Weiner and the Munchie Machine, which served hot dogs and French fries.

There was also a watermelon eating contest for the students who felt they had the skills to take down the large fruit with haste.

“I did every single water activity including the watermelon contest,” senior movement and sports science major Christina Kinney said.

Most students who participated walked away with free neon tank tops, sunglasses, and sunscreen to prepare for summer.

“My favorite part about Soakfest was the tank tops and sunglasses and not to mention the hotdogs that were wrapped in bacon, because bacon is basically the best thing ever,” sophomore psychology major Ky Dorsey said.

“Soakfest was extremely convenient for the crazy hot weather that came out of nowhere,” Dorsey said.

“I loved everything about Soakfest. It was so much fun I felt like a big kid again,” Kinney said.

Students can look forward to the annual Soakfest event around the same time next year in hopes that it will be even bigger and better than this year. 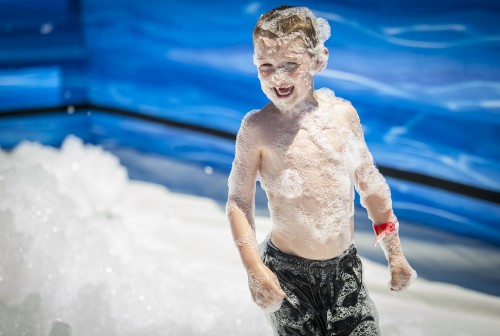 Lance Durant, son of strength and conditioning coach Matt Durant, takes a break from the other attractions to jump into piles of bubbles in the foam pit. / photo by Hunter Cole 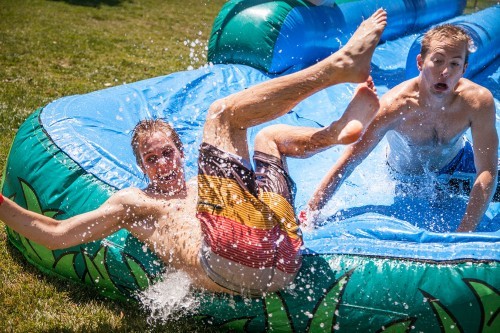