By Katherine Careaga, Veronica Sepulveda on May 3, 2013 in Community News, News 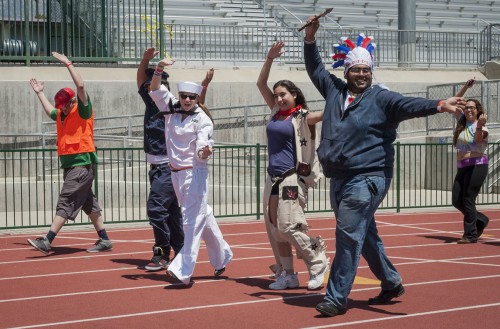 The fight against cancer came home as many participated in a Relay for Life to promote “Celebrate, Remember, Fight Back.”

With 30 teams totaling more than 340 participants, the Claremont-La Verne relay raised $60,937 for the American Cancer Society and will continue collecting until August.

“We look forward to the day when we can say Claremont-La Verne one, cancer zero,” event chair Andrew Johnson said.

The event began with an opening ceremony that included a speech from Bob Kinzle, a Hero of Hope.

Kinzle was chosen by the American Cancer Society to be a “Hero of Hope.”

He spoke about his battle with cancer and gave an inspirational speech that touched the hearts of many of the survivors present in the crowd.

“We are all here because we want to kick cancer in the rear end,” Kinzle said.

“Heroes of Hope share their stories of survival to inspire those going through the same thing,” Johnson said. “It validates what we (American Cancer Society) do.”

The ceremony kicked off the celebration portion of the relay, which is dedicated to celebrating the lives of people who are living with cancer and who have survived the battle.

“We celebrate them,” Johnson said.

“They have gone through this treacherous journey but they are still here walking laps, giving speeches, carrying on with their normal lives. It’s fantastic.”

Survivors led the first lap as the song “We Are the Champions” played though the speakers around the track.

Among the walkers was cancer survivor Cynthia Vant Hul.

Vant Hul was diagnosed with breast cancer in 2002. After the news, she was not sure how to cope with it.

After a surgery in 2003, she decided to participate in the Claremont Relay for Life, where she and her mother Becky Lozano started a team called “Rebels with a Cause.”

“I was so sad because I didn’t know what was going on,” Vant Hul said.

“So I got here and saw people like me, ‘my people’ I called them, and this event ended up changing my life.”

Due to the inspiration of the event, Vant Hul felt the support of all the people present that day and, with help from her friends she was able to finish her first lap.

Vant Hul decided she would not let cancer get the best of her and after beating the disease she became more involved in Relay for Life.

As a council of the board, Vant Hul was one of the main people who fought to combine the La Verne and Claremont Relay for Life. This is the fourth year the two cities have been combined.

Now, organizations from Claremont and La Verne continue to support the relay.

“What’s different about this year is we really reached out to the University of La Verne and to get them involved,” Johnson said.

“They have 3 teams this year with more than 40 people.”

Among these teams was Team Stu-Han Clan.

The team was created after Sasha Jones, Stu-Han RA, met John Gilmore on the trip for the Martin Luther King Jr. Service Day. Gilmore is the captain for the ULV team “Cure-iffic!”

Jones took initiative and started her own team with the residents of Stu-Han.

“It all started simply because we all had something to fight for,” Jones said.

“Everyone has been affected by cancer in one way and we all came together and we knew through all of it, it was worth it.”

Members of the Stu-Han Clan sold cupcakes in order to raise money for their team. They raised a total of $225.

All the teams came together for one cause and enjoyed themselves at the event with all the activities scheduled.

At 9 p.m. the “Remember” ceremony began, where families purchased luminaries, which are bags decorated in memory or in honor of a loved one who is affected by cancer. The bags are placed around the track with a candle inside and a lap was lead in silence.

The “fight back” ceremony began the next morning, where participants learned how they could fight back and use resources available.

“All our efforts that we put in year after year will eventually lead to that last and final breakthrough that will make it so we live in a world where we don’t have to hear the words, ‘you have cancer,’ that’s why I relay,” Johnson said.

Veronica Sepulveda can be reached at veronica.sepulveda@laverne.edu.