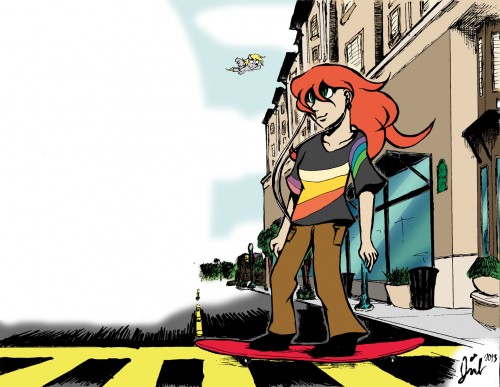 Tires screech; hearts stop. That is the feeling I get when I ride around school and an accident almost occurs.

Being a student who rides a long board around campus, I know first-hand how crazy drivers can be.

They drive too fast, do not completely stop at stop signs, and they do not pay enough attention to their surroundings.

They are not putting themselves in danger. It is people like me – long boarders, skateboarders and cyclists – who suffer the consequences.

“There have been numerous times I’ve been crossing the street and a car almost hit me,” said Stephanie Ellis, freshman biology and child development major. “It’s ridiculous.”

Last semester, La Verne issued a notice to students via email regarding jaywalking.

It explained that there had been a number of close calls where pedestrians were almost hit by cars, and any pedestrians caught jaywalking will receive a citation.

However, pedestrians walking by foot are not the only ones that need to be worried.

Many students at the University of La Verne use a different means of transportation besides walking or driving.

They use skateboards, bikes, scooters, long boards, nickel boards and penny boards as speedy, efficient and entertaining ways to get around campus.

The only potential problem is the fact that most students do not wear helmets when they are riding their bikes or boards around school.

A study by the Children’s Hospital of Philadelphia states that each year more than 500,000 people in the United States are treated in emergency departments, and more than 700 people die as a result of bicycle-related injuries.

Ky Dorsey, a sophomore psychology major, rides his skate board all around the school, but he never wears a helmet.

“It does no harm to wear a helmet except to your swag maybe, but if you’re a good enough and observant and attentive enough skater, then I don’t think you’ll need it,” Dorsey said.

Obviously, many other students have the same opinion as Dorsey; they know that helmets are good protection, but they look strange and childish.

I do not wear a helmet. I choose not to wear one because I am a decent long boarder and I do not like the way they feel and look on my head.

One of the biggest reasons I do not wear a helmet around school though is simply because of the fact that I am at school.

I should be able to feel safe riding around the campus and not have to worry about being hit by a car.

Most college students have been riding their bikes or boards for a while, so they are observant and skilled riders.

Sasha Jones, junior criminology major, rides her bike and her long board around campus.

“I don’t feel the need to wear a helmet because I feel like I’ve been doing this for so long that I am well trained,” Jones said.

What Jones said is probably true for most students, but they still need to be aware of what is going on around them.

“I’ve almost been hit a few times, but I know how to be aware of my surroundings,” Jones said.

“I don’t ride a bike or long board around school, I just walk,” Ellis said. “But I make sure to always pay attention because you don’t know what to expect.”

It is a reciprocal situation for drivers and pedestrians.

The simplest way to avoid disaster is for drivers and pedestrians to be aware of each other’s presence and to share the road.