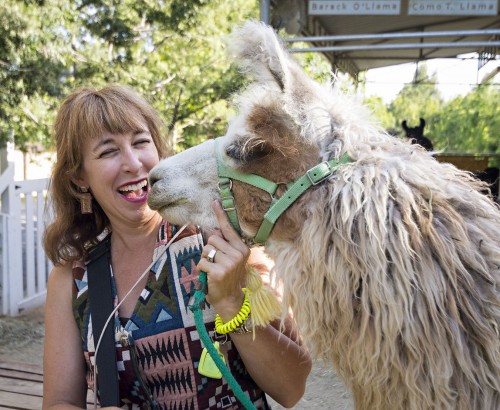 Sharon “Mama Llama” Brucato and her husband, Paul, have been walking llamas for the last six years thanks to their son’s interest with the animals at an early age. They keep five llamas in their private residence in Yorba Linda, which is fully certified and licensed to house the animals. For a $50 fee, guests can walk, feed and pet the llamas and receive a lesson on the behavior and characteristics of llamas. She also sells llama products such as a children’s book she wrote herself and llama pajamas. / photo by Christopher Mora

While it’s quite common to see a couple walking their dogs around the neighborhood for exercise, in one small Yorba Linda community there is a couple who gets their cardio with a different pet at the end of the leash.

Sharon Brucato, better known as “Mama Llama,” and her husband Paul, who she lovingly calls papa llama, have been in the business of llama walking for six years.

When I first heard of this through a classmate,  I thought it was an interesting experience and quite unique in its kind, sparking my curiosity.

I explored Bruceton website for more information, getting more and more excited as I read each llama’s personal first person profile along with the different goods Brucato sells, such as an educational children’s book about her llamas, llama pajamas and llama mugs and shirts.

It soon became my mission to try and be a part of this experience – along with a few of my fellow Campus Times cohorts.

As a car-full of us ventured out Monday to the El Cajon Trail, where these llamas could be found, we bickered the whole way about which one we would be able to walk unaware that we would each get a chance with every llama.

When we got there, we were surprised to drive up to a typical home in an upper-middle class community. Except for the Brucato front yard, which featured five llamas.

Starting a llama walking business was not always on Brucato’s mind, but after retiring from her former profession as a ghost writer –  and since her son disliked all other animals, except for a pet llama – she said the business became a logical move.

“I told my husband that if we had more llamas than we had family members we would need some help,” Brucato said.

Brucato’s husband made it clear that the quirky business is his wife’s.

“It is her thing, it is her business, I am just here to help,” he said.

Brucato came across the llamas through a breeder and hand picked each llama for its unique qualities.

Four out of the five are retired show llamas who have won awards for their beauty and skills such as walking a straight line on a teeter totter or picking up a red ball.

“They were just too playful to be grand champions,” Brucato said.

They were originally bred from grand champion blood lines to win ribbons but after their first few competitions, their focus was questionable and their breeders decided to cut their losses and sell them.

She charges $50 per person to walk a llama, and walks are available to anyone or private groups every weekend from 5 p.m. to 8 p.m.

Equipped with leader Pajama Llama, wise Dalai Lama, inspirational Barack O’llama, kind Como T. Llama and sassy Drama Llama, we took on the small streets of Yorba Linda to give the unusual pets some exercise with a four-mile walk.

We passed local residents who did not seem fazed by the unusual site and were even greeted by several other people waking their dogs or jogging along the trail, noticing the llamas’ new haircuts and we were soon able to see each llama’s unique personality.

“He is so excited he runs everywhere,” said one of the walkers, Stephanie Lopez, freshman broadcast journalism major, about Como T. Llama.

The trail we walked was lined with other homes that resembled modern ranches, having horses and chicken coops line the way to our destination.

We then passed in front of the Richard Nixon Presidential Library and Museum, giving people quite a sight as we stopped in front of a Sea King helicopter for pictures all the while having people gawk from afar.

Cars stopped mid-street to ask questions and take pictures and some even screamed “Can I have one” out of car windows.

Every other llama sported a typical haircut with the exception of this sassy newcomer.

Drama Llama had a poodle cut and is different from the others in the sence that it is smaller and instead of being from Peru, it is from Argentina.

Brucato jokingly calls it a “gir-donkey,” a giraffe and a donkey mix, and claims it is the only llama with a poodle cut in the world.

“They get groomed once a year” Brucato said. “They also roll in the dirt to clean themselves.”

These light-hearted animals also have a sense of humor.

“Sometimes they just like to run around in the sprinklers,” Brucato said. “They are like 3-year-olds and love to wrestle with each other.”

Brucato makes sure that, along with this unique experience, people also take away new knowledge of the creatures. Along the walk she gives llama lessons while debunking some common misconceptions of the loving animals.

For instance they do not have upper teeth so they are unable to bite, and they only spit when provoked, which is usually just at each other.

Mid-walk we enjoyed a brief break at Hurless Barton Park, where we tied up the llamas as we continued our llama lessons on a bench only to have hordes of children and parents surround the kind and curious animals.

“They are more like cats than any other animal,” Brucato said. “The same way your cat knows its name and ignores you fully.”

Other services she offers include taking the llamas to charitable organizations and events, such as visiting foster children and autistic children.

“It is good for their egos to experience a truly safe animal,” Brucato said.