Book Review: ‘Interestings’ is above average

Picking up Meg Wolitzer’s “The Interestings” and trying to read the book between projects is a mistake. After getting past a plot set-up that takes a while to get off the ground, there is no going back. This book will entertain and completely absorb readers. This story of friendship that is followed from the 1970s to the modern world is like trying to get out of bed in the morning – the blankets are just too warm. 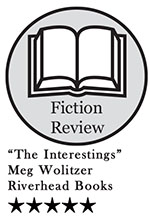 The story follows what it means to have talent, be gifted and being successful. Some burn too bright too fast and others are meant for the long-term. The story deals with the reaction of the main character when faced with the desire to be noticed among stars. The soft glow of childhood friendship diminishing and restrengthening into adulthood is Wolitzer’s shining glory with this book. The story is almost heartbreaking. Following these characters as each of them gains a life of their own would bring any reader to remember their own lives as they turn the pages.

The only person who can be assumed to be the main character, Julie “Jules” Jacobson, is awkward but funny to a group of eccentric teens. As the story opens she has been accepted into the “cool group” of teens attending the Spirit-in-the-Woods summer camp. While she and one other character are there on a scholarship from school, the rest of their new friends are from extremely wealthy families. The remainder of the group includes dumpy Ethan Figman, busty Cathy Kiplinger, musical Jonah Bay, elegant Ash Wolf and trouble-making Goodman Wolf. They have dubbed themselves “The Interestings” because according to their group, they are the most interesting group of people at the camp. After having nothing but fun during summer camp, the group stays close through the rest of their lives and are only separated when one goes through something traumatic. By the end of the book, the only ones left of the group that are still close are Ethan, Jonah, Ash and Jules.

While they are all at camp, however, the reader gets to witness the awkward courting of Ethan and Jules for all of two minutes. Though it seems like a trivial thing to focus on, this relationship proves to be the most important in the entire book. At 16 years old Ethan decides that he will continue to make his feelings known to Jules in one form or another even though all she feels is affection towards him. This short-lived fluttery romance keep them completely devoted to each other for the remainder of their lives and keeps this group of friends connected. The duo, though they marry different people, are grounded in the fact that they want to keep the group of friends they have. The group goes through a tearing apart as one is accused of rape, an unlikely pairing gathers greatness and our main character must deal with her own feelings toward the awe she gathered from her time at the camp. Her coping with not being able to be as interesting as the people she surrounds herself with runs in and out of the twists the story takes. All the while these realizations ground the reader so they can absorb each story as it is explained.

The only slow part of the book was the opening three chapters. The introduction of Wolitzer’s world seems to drag through a description rather than launch the reader right into the action. Setting up key relationships is important for this story, so it is a necessary evil that readers will have to get through. This group of teenagers is complicated to describe. Every connection that ties their friendship together is touched on as the story progresses and while it is slow, the opening of the book is important to get through.

The title of the book is ironic because this group of “Interestings” is not that interesting. Besides the lavish wealth some of the characters posses, their experiences do not separate them from the average person by that much. Each character’s history is broken down, each one having about two chapters that develop them further for the reader. It just proves that everyone has that one story about their life they could write about and Wolitzer’s beautiful piece emphasis how even the average can be interesting. The book is separated into three sections, each with as many chapters as needed to expand on these parts of the character’s lives.

One thing that this book did very well is take the reader through the lives of these characters. It was never awkward when one chapter would be talking about something that happened back in the ‘70s and then jump to 2009 when all of the characters are entering the golden years of their lives. The author used history to remind the reader of what decade they were reading very casually. A character might recall that all the songs they loved were about Vietnam or that 9/11 had deeply affected their feeling of safety being separated from one another. It pulls all of the plot turns in the story into the real world and gives a time period to be considered to figure out the passage of time.

One issue that readers may have with the story is the use of language. Wolitzer is not shy in describing the innermost thoughts that most people have so do not believe for a second that anything will be sugar coated unless it is to fall in line with a character’s development. The other half of language in this book is the vocabulary list that is used. To clarify this – they use “big” words. Not to make anyone feel dumb, but because these characters believe themselves too sophisticated to use smaller terms to describe how they feel about something. It slowly is sprinkled less as the book goes on but still present throughout.

There might be some frustration aimed at Jules as a main character. Her easily molded and changed personality is heavily affected by Ash’s opinion and beliefs and it is not until she is a fully recognized adult that Jules is seen as a leader rather than a follower. However, she is still enjoyable to listen to as the story progresses. She has realistic realizations about herself and her life. The lingering she does on certain memories is always important for the reader to understand and while she might be a tad anxious at times, she is only human.

As the end of the year approaches and students look for something to read this title should definitely be on that list. The story is moving and causes self reflection as each character’s individual life is unwrapped chapter by chapter. Just make sure that there is time to spare when reading this story. This is a book that will be extremely difficult to put down once it has someone’s attention.

Meg Wolitzer’s “The Interestings” is available for $12.99 on Kindle and Nook. Barnes and Noble carries hardback copies for $16.63 and Amazon for $15.99 and lower.