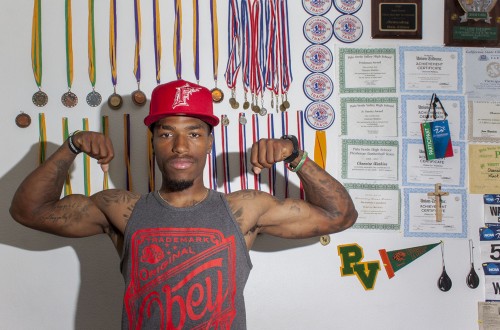 Junior speech communication major Chancise Watkins does more than run track. He enjoys video games, collecting hats and getting tattoos. Watkins gets his tattoos from a friend back home in Blythe, Watkins’ dorm walls are covered with his awards that he has accumulated over the years. Watkins won the 200-meter at the SCIAC Championships with a time of 21.31. / photo by Stephanie Ball

Junior track and field team member Chancise Watkins was just minutes away from the biggest race of his career.

As the other 200-meter competitors exchanged greetings, Watkins did not talk to anyone.

He didn’t have to. He was in his lane, limbering up for the sprint ahead.

As the officials told the runners to take their marks, Watkins lowered his bright orange-lensed sunglasses over his eyes.

Just 21.31 seconds after the gun sounded, he was finished – on his way to the podium where he belongs, where he always wants to be.

It was intensity, it was focus. But those that know Watkins also know that this is nothing new.

Watkins had a record setting season, capturing the Southern California Intercollegiate Athletic Conference title for the 200-meter at the SCIAC Championships on April 5 and 6 at Occidental.

The performance ranks as the third fastest in the nation at Division III to date.

Watkins also ran the fifth-fastest 400-meter this season with a personal best 47.75.

Not to mention, he ran with a strained hamstring.

“It just felt good to be on top for once,” Watkins said. “It felt like I was in my own world at the time.”

“I was visualizing the Olympics and how they feel when they stand on that podium and get the gold medal,” he said.

Among the track team Watkins is also known as quite the comedian.

“He is hilarious,” junior teammate Matt Rehder said. “He doesn’t say much, but when he does, everyone listens.”

“As a competitor, Chancise’s greatest asset is his work ethic,” Rehder said. “It pushes you to have a teammate that works as hard as he does.”

Watkins grew up in Blythe, Calif., and began running at the of age 4.

He was a rambunctious boy, always being chased by his parents, who discovered his running talent early on and knew he would become a track star.

He ran track at Palo Verde Valley High School where he competed in state championships.

“Track is my first love,” Watkins said. “It is my passion and heart to this day.”

Watkins is a speech communication major and an aspiring ESPN analyst.

He hopes to one day have his own talk show where he interviews athletes who share his same passion for sports.

Watkins attributes his success to his coaches.

“They’ve been pushing me to limits I didn’t think I could go,” Watkins said. “They’ve been keeping me motivated and my head held high when things haven’t gone my way.”

“I’m proud of him,” head track and field coach Pat Widolff said. “It has been kind of neat for me to see someone grow like this emotionally and intelligently, outside of track.”

Watkins will compete in the 200-meter and 400-meter at the NCAA Division III Track and Field Championships May 23-25 in La Crosse, Wis.

His said his goal is to break the record for the 400-meter and his own 200-meter record.

He said he also yearns to win a national championship and to earn an All-American title.

“I am just trying to get mentally prepared and focused,” Watkins said. “I am trying to get my body ready to be at top shape and just go out there and run my race.”

“He hates to lose,” Widolff said. “He always runs his best time against the best competition.”

“Once you are this good it is hard to get better, but he will be ready,” Widolff said.