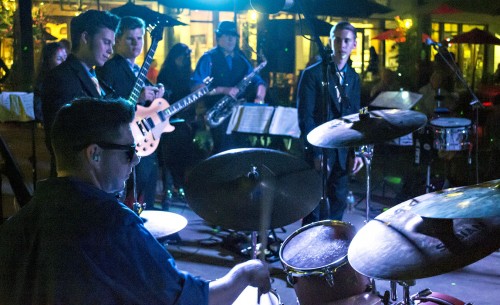 Give Up the Junk from Chino Hills closes out the night at the Claremont Village’s weekly summer and fall event, Friday Nights Live. Drummer Michael Otkay completes his drum solo during the band’s rendition of Kool and the Gang’s hit “Celebration” while bassist Brendan Bennett, electric guitarist Garrett Hazen, singer/trombonist Michael Bennett and singer/saxophone player Erick Diaz prepare to jump in and finish off the set. Friday Nights Live runs every Friday from 6 p.m.-9 p.m. / photo by Christopher Mora

Music lovers of all genres are treated to live music of every genre on Friday nights in the Claremont Village.

The Friday Nights Live music series hosted of a variety of bands that play live music in certain areas of the downtown.

“My family and I come out to this every Friday night, it’s always such a great time. We love it,” Rancho Cucamonga resident Sandra Stapp said.

Last Friday, attendees were treated to the sounds of soft rock by the band Dynamite Dawson in front of the Claremont Chamber of Commerce.

As people made their way down the block to Laemmle Plaza, a large crowd sat at tables under large umbrellas enjoying the jazz-meets-funk sounds of Give Up the Junk.

Consisting of an eight person ensemble – including a trumpet player, piano player with guitar and bass – the group played songs ranging from today’s hits to classic numbers to old Latin songs.

Families and couples danced to the sounds of Santana’s “Oye Como Va” and Maroon 5 songs such as “She Will Be Loved.”

“All I do is work so this kind of thing renews my love and new appreciation for music which has been such a rich opportunity for me,” Burkhart said.

Families made their way down the street to the Claremont City Hall to catch a few rock numbers by Drift Iron.

The sidewalk was filled with couples who enjoyed listening to some original songs performed by the group while also hearing a couple of the classics being covered by the Black Crowes.

Upland resident Ann Meyers attended the concert series for the first time and said she instantly fell in love with it.

“It’s absolutely great; I don’t know why Upland doesn’t do this,” she said.

“I love getting to people-watch while listening to live entertainment and also getting to shop all at once,” Meyers said. “It’s a great way to get people together in the downtown area.”

The event is perfect for any lovers of music.

“Anywhere you put music, especially music that makes you want to get up and move you’re going to get a crowd. After coming for the first time last year we instantly knew where we were going to be every Friday night,” Stapp said.

Families, couples and college students will continue enjoying nights on the town with the Friday Nights Live series going on now through October.

From the dance floor to first base
First-person experience: Taking a walk on the wild side