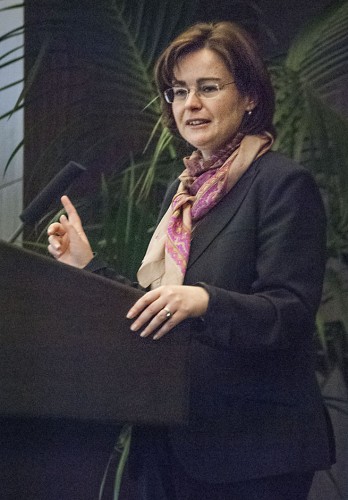 Marina Schuster, a member of the German Parliament, spoke on “Human Rights and International Justice: A Common U.S.-European Agenda?” Wednesday in the Campus Center. Schuster is a leader in foreign policy and human rights. Her lecture was presented by the Benazir Bhutto and Ahmed Ispahani International Lectureship, and the International Studies Institute. / photo by Kelley Maggiulli

The lecture concentrated on human rights and international justice throughout the world, in which her branch of parliament specializes. Schuster has been a member of the German Bundestag since 2005.

She started the lecture by discussing the euro and its currency value as it has been a topic of interest given that it has gone up and down in the past few months.

Schuster said that in Europe the condition of the euro is their number one issue, but she believes that the euro is not suffering a currency crisis.

Instead, she said that it is important to have reforms in the labor market in order to get things fixed.

“It is not a solution to just print money,” Schuster said. “Structural reforms are the only way out.”

In the lecture she did not want to emphasize the euro, but thought it was important to address it since it has become a popular topic in the news.

She stated how the European Convention on Human Rights is the only organization that provides the best protection toward human rights.

Each European country that is part of the ECHR has voluntarily joined.

As an activist for human rights, she talked about a new bill Russia has signed concerning propaganda, which would criminalize homosexuality and keep kids “safe” from displays of homosexual affection.

Schuster said Russia is going against the beliefs of the ECHR because they are discriminating against a group of people and their ideas go against those of Russia.

She also addressed the issues in Syria and said that each week they receive new data about the ongoing problems in the country.

Her parliament branch is currently trying to figure out a plan to help Syrians and their rights.

“We believe justice is important for the reconstruction of Syria,” Schuster said.

She said Russia should care about the problems in Syria and the Middle East because if they do not, the problems they choose to ignore will eventually hurt them.

As part of being on the Committee on Human Rights and Humanitarian Aid, she gave tips on how people can help make a change towards those who do not have a voice.

She said that anyone could be a human rights ambassadors and promote the well being of others. She suggested that people write letters on serious issues to Congress and get involved through campaigns in order to let people’s voices be heard.

Elsa Castillo, senior international business major, said the lecture was very informative and could relate to the issues Schuster talked about because her class had discussed such topics.

Steve Morgan, former president of ULV, liked that Schuster talked about problems going on around the world.

“She did an excellent job,” Morgan said. “It’s easy to focus on our own world. She brought some international perspective to the issues going on.”

At the end of her lecture, Ahmed Ispahani, professor of business administration and economics, gave Schuster an award for her effort in fighting for human rights and justice.

Clo Hidalgo can be reached at clotilde.hidalgo@laverne.edu.