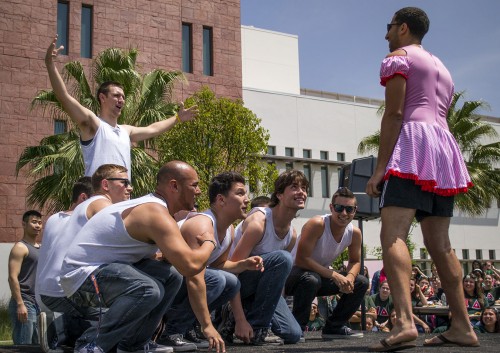 Students and faculty gathered on the South Quad to watch Greek Perfect, an event organized and put on by the Greek community to showcase an original capella song.

All six organizations performed in front of a secret pannel of judges and audience members battling for the top spot.

The crowd cheered as each organization took the stage seeming like every performance was better than the last.

“We prepared as best we could thanks to some brothers that took that lead behind this, we practiced as best we could and I think we did great considering how stressful it was,” Steven Castellanos, sophomore psychology major and Sigma Alpha Epsilon member, said.

“It was amazing because we were all in it together. Even though we were small, it was great hearing us harmonize,” said Castellanos.

A crowd favorite and one of the most memorable performances was Phi Delta Theta fraternity, who performed covers of popular songs sung by boy bands while serenading and competing to win the heart of their president, Michael Wahba, who was sporting a pink dress to better fit his role.

“This was a fear that I had to overcome but thanks to my brothers and all of their support and everything that they did for us like all of the practices I was able to perform and just have a good time,” Juan Mejia Simental, sophomore criminology and psychology major and Phi Delta Theta member, said.

Lunch was also provided drawing in hungry students and curious stragglers to enjoy the show.

At the end of the event, scores were tallied and Sigma Kappa took first place in the standings with Iota Delta closely following them in second, Phi Delta Theta at third, Phi Sigma Sigma coming in fourth, Sigma Alpha Epsilon at fifth and Alpha Omicron Pi came in the final spot.

“It was amazing that I did this with my sisters its just something we had fun doing together, and I had a great time especially sharing it with them,” Perla Fuentes, junior psychology major and Phi Sigma Sigma member, said.

This was the first Greek singing event held by the University since the last Lip Sync competition held during Greek Week in 2010.

It was planned in cooperation with the College Panhilenic Association and the Inter-Fraternal Council.

All participating organizations will receive a cash prize, amount according to what they placed.