By Erica Maurice, Mitchell Aleman, Stephanie Ball, Zachary Horton on May 24, 2013 in News 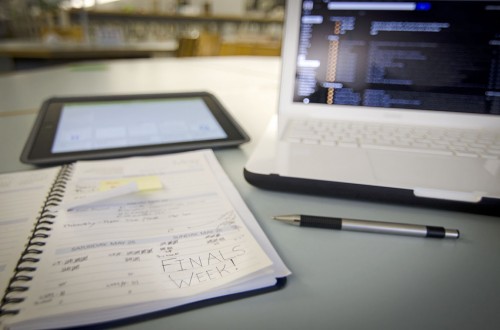 The onslaught of the upcoming finals week sends students into a cramming fury. Finals begin today and continue after the Memorial Day weekend through May 31. / photo illustration by Zachary Horton

With finals week approaching, students have many ways to prepare, deal with stress and make sure they pass their classes.

Some are taking advantage of the fact that the library is staying open 24 hours beginning May 19 through May 31.

In an informal survey of 11 students, most said they are taking advantage of the library’s extended hours in preparation for finals week, and five said they were stressed about finals.

Even fewer said that they did not need to study as much.

“I do better if I’m not stressed and whatever happens, happens,” sophomore economics major Justin Shrurstein said.

Schrurstein said that most of his classes are pretty easy for finals.

He said he paid attention during the entire semester so that he is prepared for finals and only needs to study for about an hour before the test.

Katie Jenson, sophomore math major, said that she does not think about her exams until the night before because if she gets really stressed, she shuts down.

Lauren Estrada, junior psychology major, said she has had an easy semester.

“I focus all my attention on one thing– get it done; then I can relax and go out with friends,” Estrada said.

Alejandra Mejia, freshman business administration major, said that she is stressed about finals because all of her tests are scheduled on the first couple of days.

“I stay focused and on track,” Mejia said. “After everything is done, I do whatever I want.”

“I think stress really got to me because I got sick so I am trying to eat healthier and take rests,” Mayo said.

“I don’t deal with stress very well,” she said.

Ramiro Valderrama, junior business major, said that he is happy that his finals are spread out.

Wayne Thurston, daytime circulation desk supervisor, said that a lot of students are using the library between midnight and 4 a.m.

Thurston said the library keeps track of how many students are in the library hourly, that will help them determine whether to keep it open 24 hours in future. 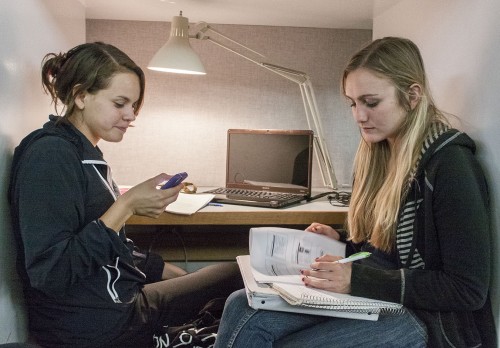 Sophomore psychology major Samantha Reed and junior kinesiology major Yanet Urciaga study in Wilson Library at 2 a.m. Thursday. As finals week approaches the library will be open 24 hours a day until May 30. Librarian Wayne Thurston says the library is least crowded between 5 a.m. and 7 a.m. On Thursday at 3 a.m., 36 students were present. Thurston also said that during the day, “It seems as if all of the tables and computers are full.” He mentioned that he’d seen many faces he had not seen in the library prior to the week preceding finals week. / photo by Stephanie Ball 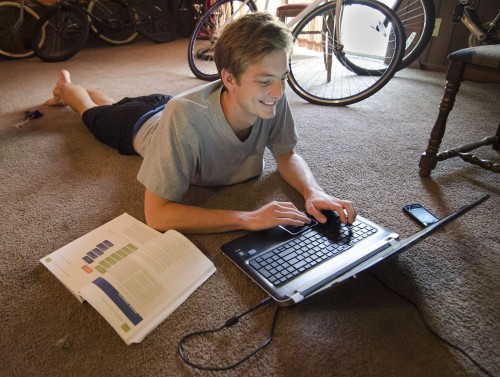