By Julian Mininsohn, Karleigh Neff, Zachary Horton on May 3, 2013 in Sports, Track & Field 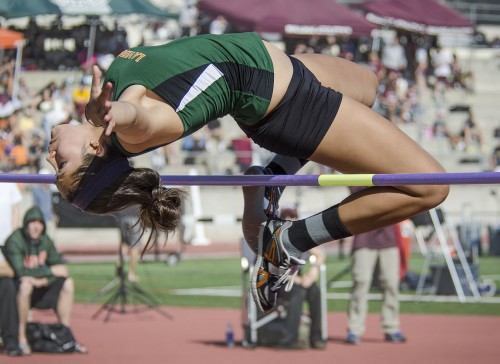 The women team claimed their fourth crown, their first since 2005, with 162 points. They finished 13.5 points over Cal Lutheran.

The men finished with 149 points, 63.5 points behind SCIAC rival Claremont-Mudd-Scripps.

“I’m nervous,” head coach Pat Widolff said before the meet. “But I think we’re ready for this. This is what we have been preparing for all season, and I think we can do really well.”

The women stacked up the majority of their points in throwing events. Junior Deanna Doss placed first in hammer, throwing 159 feet, 10 inches, and second in discuss, throwing 119-1.

Senior Losa Akauola placed first in discuss with a throw of 122-11, and second in the hammer with 142-4.

In running events, junior Ebony Williams and junior Nicole Crutchfield qualified for day two in the 100-meter and 200.

“I’ve been getting a lot of rest,” Tucker said. “I think we are pretty prepared for today and this weekend. My biggest competition is coming from Redlands.”

Although the men did not take first on day one, they did have some great individual performances. Junior James Francis leaped into first place for long jump, with a personal best of 23-3.

In the 400-meter hurdles, freshman Andrew Cruz and junior Victor Rodriguez qualified for Nationals as they both placed second.

For the women, senior Losa Akauola captured her second individual crown of the day with a winning toss of 43-0 1/4 in the shot put.

Junior Nicole Crutchfield won first place in the 100 for the second year in a row with a season best 12.25.

Crutchfield was also named the fastest woman in SCIAC for the second consecutive year with a 12.25 run.

She was the only La Verne athlete awarded first place in the track category of the All-SCIAC awards.

Junior Ebony Williams took third place in the 100 for the Leopards tying her personal best of 12.42.

For the men, senior Michael Anderson repeated as SCIAC champion in the 110 meter hurdles with a time of 15.12.

“During the race it was vicious arms and attacking,” Anderson said. “On the podium it was all about giving back to my teammates and symbolizing La Verne.”

“I always tell myself it is mind over matter,” Francis said. “Just having fun was the main part.”

Junior Chancise Watkins won his first conference individual title with a time of 21.31 in the 200, tying a La Verne school record.

It was the third fastest 200 in the nation at the Division III level.

“I just got in the zone,” Lopez said. “When it was all over I was champion. I love all my teammates out there and on the podium with me.”

With their impressive performances, many Leopards qualified for the NCAA Division III National Championships, which are set for May 23-25 in La Crosse, Wis.