By Christopher Mora, Monique Parra on May 3, 2013 in LV Life 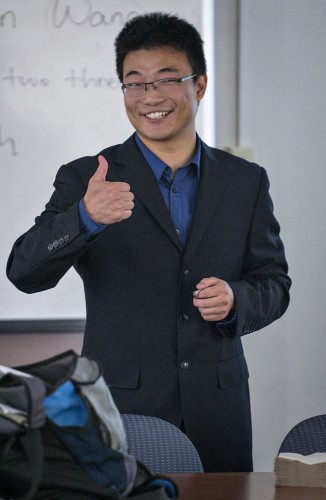 Chinese native Chun Wang speaks on April 25 about his culture, growing up in China and his thoughts on Chinese politics and policy, in a lecture hosted by the International Student Organization in the West Dining Room as part of their “Focus On” series. / photo by Christopher Mora

The University of La Verne International Students Organ­iza­tion sponsored a talk by Chun Wang, a graduate student in the College of Education, April 25 in the West Dining Room.

Wang, whose name means “pure king,” described Chinese culture and the Chinese Zodiac through his personal experiences of growing up in China.

The ideas and ethics used came from the philosopher Confucius who was known for his moral values and as the founder of Confucianism.

While China represents 1.4 billion people out of the 7 billion people in our world, Wang discussed how the population boom began and the effects it will have on the country in the future.

In 1979, China adopted the one-child policy to try to limit the starvation, poverty and lack of economic growth caused by overpopulation.

Wang’s birth drove his family to move from town to town, in fears of being caught by the government. If they were caught, they would be faced with taxes, fines, loss of job or even demotion.

“I hate the one child policy,” MBA student Yating Zhang said. “I feel so lonely because of this policy and didn’t grow up with any brothers or sisters.

With the large amount of people living in China today, concerns have surfaced on to who will take care of the elderly when the time comes.

“If I was in that situation I’d pay more to have that other child,” MBA student Araceli Sanchez said.

Today China is considering ending the one-child policy based on other needs.

Wang then moved on and asked the audience what they knew about the Zodiac calendar. Wang gave out red Chinese ornament coin tassels that represent heaven, earth and attracts money with the knots that are located on the top.

The snake is the Chinese zodiac symbol of the 2013 calendar. The snake represents malevolence, cattiness and mystery according to Wang.

Wang concluded his presentation with authentic Chinese almond cookies and macaroons for his audience.

The next ISO meeting will be at 11 a.m. May 9 in the Campus Center focusing on India, led by junior foreign languages major Tahil Sharma.

Monique Parra can be contacted at monique.parra@laverne.edu.

One Response to Wang shares thoughts on culture, childhood, policy