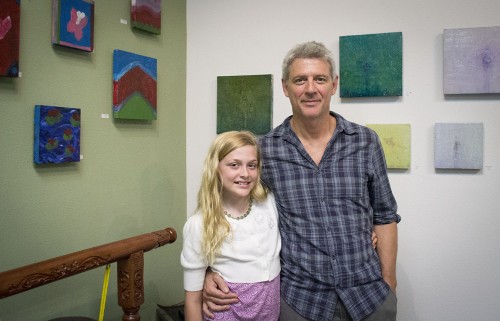 Father and daughter artists Christopher and Sequoia Cousins display their oil and mixed media works in an exhibit titled “Family Archetypes” at Buddhamouse Emporium in Claremont. Christopher Cousins is known for his role as Ted Beneke in the AMC television series “Breaking Bad.” In 2000, he started showing his artwork around the Los Angeles area, and in 2005 he participated in his first international exhibition in Venice, Italy. Sequoia Cousins is 10 years old and has occasionally worked with her father in his studio. / photo by Jasmin Miranda

The owner of the store, Charlotte Cousins, is Christopher’s sister.

“I wanted to feature Chris’ exhibit this month because his birthday is in September, and I wanted him to have a show on his birthday month,” Charlotte Cousins said.

Christopher Cousins has also been acting mainly in television since 1986. He is best known for his role as Cain Rogan on the soap opera “One Life to Live,” and more recently as Ted Beneke on “Breaking Bad.”

Although their styles are significantly different, both used the same materials to create their works.

“It was fun working on this exhibit with (Sequoia) because we were working with the same material and it was interesting to see how our pieces came out,” Christopher Cousins said.

Christopher Cousins’ works portrayed a serious tone. For each of his pieces, he attached a form of natural material to act as textural support to create an organic and chaotic environment.

In the back room of the store hung a red acrylic painting, which immediately captured people’s attention as soon as they entered the room.

It contained what looked like gashes and scars that encompassed the viewer.

The emotion the piece conveyed proved that the work is more than an abstract piece; it evoked deeper emotions.

“I like to think of my works as more symbolic than abstract.” Christopher Cousins said.

“When I was working, I became fascinated by archetypal works because you get a sense of something, but you can’t decipher it,” he said.

Christopher Cousins said his favorite piece out of his exhibit is “Untitled Orange.”

“I like the piece because there’s a really kind of basic simplicity to it,” he said.

She is only 10, but her talent exceeds her age.

Christopher Cousins said his daughter took an interest in art at the age of three when she began watching him paint in his studio.

Now, she is painting with him at their home studio and publicly displayed her work for the first time in the exhibit.

“My dad helped me with my pieces when we were getting ready for the show,” Sequoia Cousins said.

Although art will always be a part of her life, Sequoia Cousins said she wants to be a veterinarian for zoo animals when she grows up.

Christopher Cousins is currently preparing for his next exhibit, which he said features a series of paintings that are as big as 6 feet by 8 feet.

He said he is in talks with an artist in Los Angeles to display his next exhibit, but nothing is official yet.

The Buddhamouse Emporium sells a variety of ritual objects, art, music and jewelry. One percent of the store’s proceeds go to non-profit organizations.