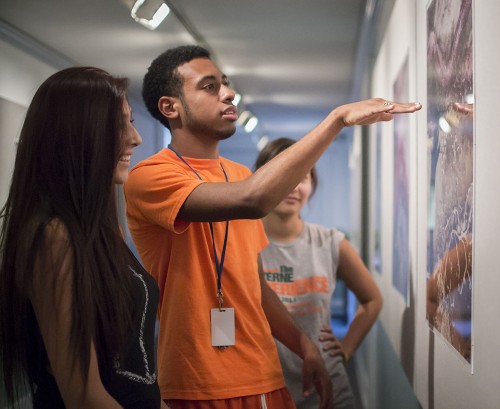 International law major Alexcess Zamora, biology major Terence McCovery and communications major Ayla Bobrove spend their photography class break discussing the aerial landscape photographs of David Maisel. The photographs are part of Maisel’s exhibit “Black Maps: American Landscape and the Apocalyptic Sublime” and can be seen in the Carlson Gallery in Miller Hall through Oct. 11. The gallery is open 9 a.m. to 9 p.m. Monday through Friday. / photo by Helen Arase

On the wall in the Irene Carlson Gallery hangs a photograph that seems to be an abstract composition of a lavender object containing a single red, vein-like line crossing through it.

The photo is simplistic, but intriguing. One would never believe the photograph is an aerial shot of a lake.

The photograph, along with 14 others, is part of David Maisel’s “Black Maps: American Landscape and the Apocalyptic Sublime.”

The exhibition depicts environmental areas that have been altered by human exploitation. Most of the photographs capture mining sites throughout the United States.

Through this exhibition, Maisel hopes to alert the public about landscape alterations that are occurring due to human activity.

He presents aesthetically pleasing photographs and then explains the composition of the photo, according to the handout found in the Carlson Gallery.

“When I first saw the exhibit, I thought the photographs were beautiful,” said junior legal studies major Allison Wehner. “But I couldn’t figure out what they were of.”

“When I realized they were of environmentally endangered sites, it bothered me that something so beautiful could be caused by destructive behavior,” Wehner said. “It has definitely made me more aware of our surroundings.”

Each of the papers take a different approach to commenting on Maisel’s work. Broussard uses a scientific approach, while Kwon uses a sociological approach,

Although both take particular approaches, it is evident that both agree that people must discover ways to prevent any further destruction to the environment.

Professor of Photography Gary Colby arranged for the exhibit to be displayed at the University.

“My goal is for the first exhibition of the year to visually depict the book that is chosen for the One Book, One University program,” Colby said. “I felt that this exhibit went hand in hand with the book that was selected this year,”

This year’s book is “Field Notes from a Catastrophe” by Elizabeth Kolbert, which focuses on the effects of global climate change.

“(The exhibition) illustrates the book for students in a non-traditional manner and makes them aware of the issues that are occurring in the environment,” Colby said.

He said he believes it is important to make the faculty and students aware of issues that are occurring in the environment, and the Maisel exhibition holds the potential to do that.

Colby was initially unsure if Maisel would agree to show his work at the University, but to his surprise, Maisel supported the idea and agreed to have his prints be displayed in the Carlson Gallery.

Maisel’s exhibition is not only raising environmental awareness on campus, but it is also inspiring some of the University’s photography students.

“It serves as inspiration and reminds us that as photographers, we have the ability to change the public’s perception,” she said.

The exhibition will continue through Oct. 11. There is no reception for “Black Maps.” The gallery is open 9 a.m. to 9 p.m. Monday through Friday or by appointment.