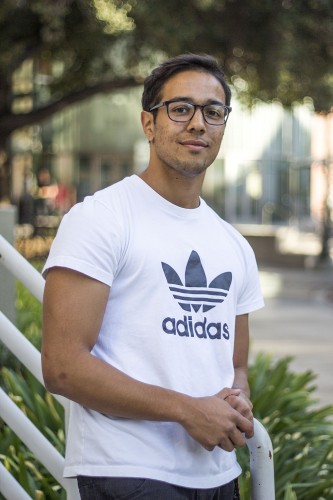 Sophomore political science major Jordan Almeida is a member of Sigma Alpha Epsilon fraternity. He served his first internship in Africa during the summer and will be returning to Africa next June for his internship with the children. / photo by Uyen Bui

During the summer of 2013, sophomore political science major Jordan Almeida had two options on how to spend his vacation.

Either sitting around the house burning the summer oil or doing a philanthropy internship in Africa.

He chose the latter.

Almeida began his internship creating biographic manuals for Angolan officials until he was transferred to the public affairs sector helping Angolan orphans.

“They needed people who could communicate better with young Angolan students and be a good advocate and also someone who could do (public relations work) and I speak Portuguese, Spanish and English so was good to have someone young and in college working with the kids,” Almeida said.

“They had me working with these orphans called Child Painting Angola, basically I’d be supervising them to paint murals in Angolan high schools and parts of Angolan cities.”

For three months Almeida worked with Angolan orphans who had been exiled from their homes due to allegations of witchcraft.

Because of the children’s artistic capabilities they had been shunned from their village accused of evil doings.

“The most life changing experience was the orphans that I worked with, because that just shed light on my whole life,” Almeida said. “It made me really think that these kids could make portraits for NBA players and Angolan officials but they live in shipping crates which is supported by nothing except cardboard on the floors.”

“These kids don’t even have decent pants and they were kicked out of their homes by their parents because of witchcraft, because they’re artists and it’s not customary in a rural society, so they were kicked out and had to migrate into the city where they live in shipping crates and paint.”

Almeida said it put a new light on how he sees life now. He said he comes from a happy home where both his parents are diplomats for the U.S. embassy.

He considers himself lucky to have a family who is doing well financially and he is privileged compared to the orphans in Angola.

“He feels even luckier and blessed after the internship,” said close friend and biology major Jacob Caropino. “It’s not something new to him he is used to seeing that type of poverity”

Almeida did not try to get into the topic of accusations of witchcraft with the orphans.

He said he was there to do a job and not get involved in personal matters.

“I really did not want to bring up anything because I was there to do a job supervising and representing the U.S. embassy,” he said. The allegations of witchcraft toward children is still an ongoing issue in Africa, where being exiled is not the worst punishment. Some Africans believe being a witch is the root of all evil, disease and death. Some punishments involve torture or even being put the death.

Almeida plans on returning to Africa soon to continue his work with the orphans.

“It shows what type of person he is,” Julian Burrell, close friend and communication major, said. “He is a hard worker. I don’t think a lot of people would think to attack the source of a problem like that.”