By Celine Dehban, Julian Burrell on October 18, 2013 in News 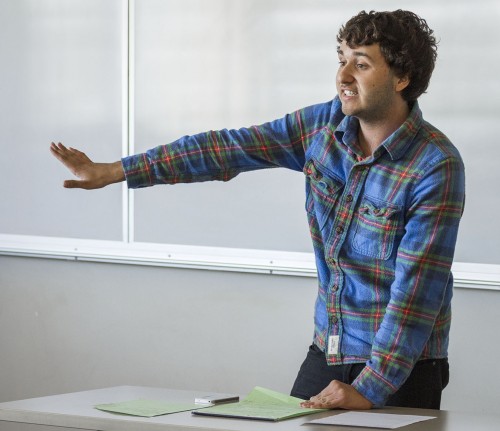 Sophomore Jonathan Singleton argues for the opening opposition team in the first debate at the tournament Oct. 11 hosted by Claremont McKenna College. The debate discussed whether the federal government should step in to aid Detroit with its financial problems. Singleton was the first from the opposition to argue against a bailout. Singleton and his partner, Melanie Nadon, were ranked second in the debate, gaining three points for their team. / photo by Celine Dehban

The La Verne Debate team is now ranked second in the nation after placing second in the final round of the National US Open at Claremont McKenna College Sunday. Team A, consisting of seniors Sam French and Carl Decker, brought home the award for the team.

A second La Verne team, consisting of partners Natalie Holland and Brittany Boiko also made it to the final round. Partners Steve Reyes and Kandin Maraquin made it to the semifinals round.

La Verne was one of 36 teams from 12 national universities, including University of Southern California, UCLA and Hawaii Pacific that competed in the weekend-long tournament.

After nine rounds, the final came down to a battle between two La Verne teams versus two Loyola Marymount University teams debating the validity of inheritance.

“The team did absolutely amazing,” said debate coach Rob Ruiz. “They had two practices a day in the summer and this is the result of their hard work.”

Reyes and Maraquin broke, but were eliminated in the semi-finals round.

They debated whether the role of juries is still appropriate in today’s society. Reyes and Maraquin argued against the use of juries.

“I think it’s one of those arguments that just got away from us in the closing,” Reyes said. “I think the other team just understood the topic a little bit better and that reflected in their arguments.”

Team A found success in the semi-finals. “We were just able to flip their logic really well and use it to work to our favor,” French said.

French and his side were for juries and frequently worked to turn points against the other side to keep their opponents from building any momentum with their arguments.

Throughout the tournament, the teams debated about several topics about economic, international and social issues.

The motions for the first eight rounds included bailing out Detroit, force feeding incarcerated hunger strikers. eliminating adoption preference based on race and ethnicity, discouraging home ownership, eliminating recall elections, giving displaced individuals the right to emigrate to any country, prohibition of self-representation in court, and unconditional cash transfers to the poor.

All of the teams expressed gratitude to their coach throughout the weekend. Partners Colin Fisk and Mary Anne Mendoza were only two points away from breaking to the semi-finals round.

Fisk expressed his admiration of Ruiz.

“Rob is more than just a coach who teaches us the skills of debate; he takes pride in helping us grow as people, to the point where he cannot sit down and watch our teams in final rounds, because he is nervous and excited.“ Fisk said.

“He puts his heart and soul into the growth and success of this team and every individual as well,” he said.

Holland, who made it to the finals round, also feels Ruiz is the team’s tool to success.

“Everything we have accomplished as a team can be linked back to our strong sense of family and support from Rob.” Holland said.

“Rob devotes so much of his free time to make sure we are the best debaters and students we can be.”

A humble Coach Ruiz expressed pride in all of the La Verne competitors and their performances for the weekend.

“They were flawless in the sense the judges will not judge on who was better but who made the least mistakes,” Ruiz said.

Debaters are also awarded individual speaking points for their technique and style. La Verne had 5 debaters among the top 10 speakers and 9 of the top 20.

“I think everyone brought their A-game. You can never predict exactly what the judges are going to say, but I think they got it the way we expected,” Boiko said.

The team was very happy with their progress and showcase of talent in the national debate sphere.

“We’ve just been working really well together in terms of communicating with each other and remaining positive,” Holland said speaking of her relationship with her partner as well as the rest of the team.

“I’m a coach with a stacked bench. I see all of this talent and I’m like ‘Who do I start when everyone is so good?’” Ruiz said.

One Response to Debate team places second in Open