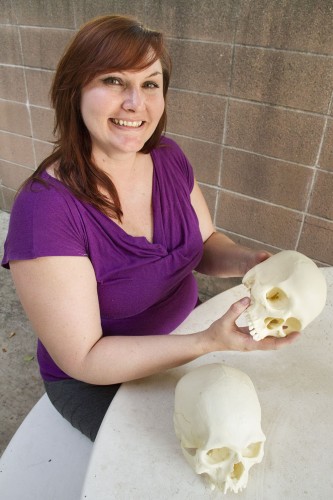 Kanya Godde joined the ULV faculty this fall as assistant professor of anthropology. Godde has a Ph.D. in anthropology from the University of Tennessee. These casts of human skulls are used during some of the lectures for her forensic anthropology class. / photo by Ryan Gann

It is not even 10 a.m. and already Kanya Godde engages her students in a lively lesson on human skulls. Instead of sticking to a prescribed lesson plan, she lets her students’ questions guide the learning process. Often times she points out a model of a skull to drive a point home. The questions keep coming, moving the lesson along instead of slowing it down.

Her students know asking questions in this class can prepare them for more than just a test. Because when it comes to forensic anthropology, Godde has a world of experience to share.

It is a facility at which forensics experts study the decomposition of human bodies, as well as collect and examine skeletal remains.

“I discovered, I think, my second year of college, that anthropology was the direction I wanted to take,” she said. “I grew up in a household where my mom was addicted to novels about serial killers and watching things about that,” Godde said.

“I naturally started watching early, early shows before ‘CSI’ or any of that came out and getting really interested in forensics. I wasn’t really sure how to marry forensics and anthropology,” she said.

“I got really excited and tried it. I could do it, and that was it,” she said about the class.

Godde graduated from Sacramento in 2002 with a bachelor’s degree in anthropology and what she called an “accidental” minor in sign language.

She went on to earn her master’s degree at the same school before earning her doctorate at the University of Tennessee Knoxville in 2009.

During her time at UTK, Godde not only taught and conducted forensic casework, but volunteered and eventually earned a paid position at the Decomposition Facility.

“It’s very labor intensive because they take in so many human body donations,” she said. “When I was volunteering I would pick up the donations once they had decomposed down to a skeletal form and inventory them. The other thing I would do was clean the skeletons in a lab.”

The first of four body farms in the United States, the Decomposition Facility can be likened to a library for forensic anthropologists where body donations decompose for about six months before being made available to anthropologists around the world, Godde said.

“At first it was a little tough to get used to. I don’t have any other words for that,” she laughed.

“Once you’ve done it a few times it becomes second nature. In fact, as I advanced in the department and through my career there, I was there many times by myself, and I just didn’t even notice what was around me.”

Even though Godde relocated to Southern California, she remains on faculty at the Knoxville facility, and predicts making at least one yearly trip to continue forensic research.

Her specialized experience brought Godde to ULV, and students are already benefiting from Godde’s in-depth knowledge of forensic anthropology.

Godde tries to meet every student’s question with a personal story from her time in the field conducting research.

“She has experience and is really confident in what she teaches,” anthropology major Cintia Ventura said.

Godde’s students said they enjoy her teaching style, emphasizing interactivity instead of the usual silent lecture.

That is not an understatement.

“We’re actually touching the skulls and observing them on our own so it’s easy to learn,” said criminology major Matthew Canlas.

Des Delgadillo can be reached at desmond.delgadillo@laverne.edu.