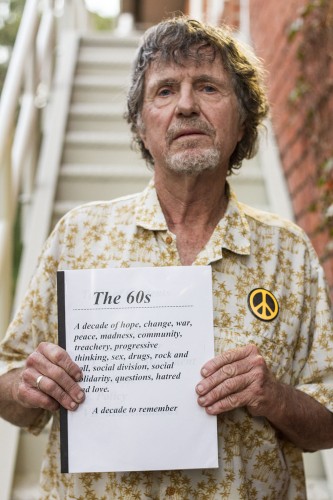 Dan Kennan, senior adjunct professor of sociology, has written the books for two of his courses, including Selected Topics: The 1960s and the Native American Experience. / photo by Ryan Gann

If you have not seen senior adjunct professor of sociology Dan Kennan on campus, you might have seen his face on the corner of Indian Hill Boulevard and Arrow Highway in Claremont every Friday protesting the Iraq and Afghanistan wars, and any other pre-emptive strike the United States looks to make that could start another war.

The Purple Heart Vietnam veteran has dedicated his life to social justice, and after decades of fighting for equality and civil rights he is still extremely active in trying to make the world a more peaceful place.

“I don’t want to change anybody’s mind, I just want to get people to think,” Kennan said.

Armed with first-hand knowledge and a disarming personality, Kennan is a Vietnam veteran, has been hospitalized three times and arrested 14 times – five during civil rights protests and nine during anti-war protests. In his day job he works to better the lives of juvenile delinquents. He is also writing a book, but still finds time to protest wars.

“After he had hip replacement surgery, I asked him ‘You’re not going to out there today, right?’” Professor of Sociology Sharon Davis said. “He said ‘hell yeah’ and walked out there with a walker.”

“In my lifetime, since I was born after World War II, there hasn’t been one war that has done anything except kill poor kids because rich kids don’t go to war,” Kennan said.

Born and raised in La Verne, the ULV alum has been teaching at the University for 15 years. He received his master’s from Pepperdine University.

His first anti-war demonstration was in Claremont the day after he got back home from the Vietnam War. Kennan is part of the Vietnam Veterans Against the War, an organization that formed in 1967.

He is now working with Iraq and Afghanistan Veterans Against the War and is in the process of setting up the University’s veterans center.

Kennan says the media has a huge influence on this generation of college students, and that is not a good thing.

“That’s our biggest problem right now as a nation, we’re a bunch of lemmings,” Kennan said. “Whatever radio station we had on last is our opinion. We don’t have any facts, we have opinions.”

“He’s just not giving you his opinion, opinions are cheap,” Davis said. “What’s really valuable is when those opinions can be backed up by information that then can persuade others.”

Aside from working at the University of La Verne and protesting wars, Kennan has been working at Boy’s Republic, a juvenile delinquent facility in Chino, for 39 years.

“He is very informative, he has a lot of knowledge with even more stories, it keeps you motivated,” said Rachelle Garcia, an employee at Boy’s Republic. “He is very passionate about the kids.”

“I’m not saying these kids are victims but as a society we need to look at how we’re treating the least among us because that’s what good, effective nations do,” Kennan said. “They help people pull themselves up.”

Kennan is currently working on a book highlighting his 43 years of work with juvenile delinquents and also give an overview of how the juvenile justice system works. The book also touches on the amazing ups and downs of a career in this field.

Davis describes Kennan of having “praxis,” where one not only has a theoretical foundation, but they go out and use it.

“He puts his money where his mouth is,” Davis said.

Growing up in the 1960s Kennan felt a deep connection with the lyrics of Bob Dylan and with lyrics like, “How can the life of such a man be in the palm of some fool’s hand? To see him obviously framed couldn’t help but make me feel ashamed to live in a land where justice is a game,” it is easy to see why Kennan loves the man who couldn’t sing.

“You guys got to grow up and live in this world,” Kennan said. “We have to mold it and change it so it’s more livable.”