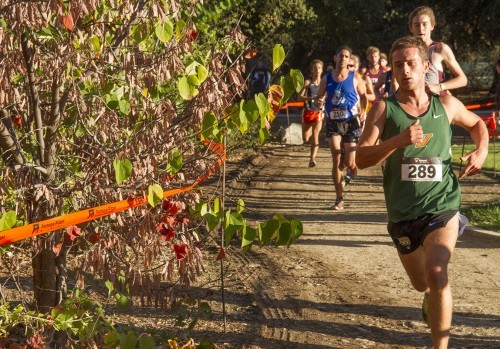 Junior kinesiology major Jayden Earlywine runs the second mile of the 8-kilometer Pomona-Pitzer Invitational cross country race Saturday. He finished 84th in a field of 165 runners, with a time of 27:46.2. The men’s cross country team took sixth place out of 13 teams with a team average time of 26:44.98. The women’s team finished in 11th out of 12 teams. / photo by Ryan Gann

Out of a total of 165 male runners, sophomore Bryan Hayes placed ninth for La Verne.

This was Hayes’ first top 10 finish of the season.

“The team did good today,” Hayes said. “We could use a little more improvement but I’m proud that we did well.”

Pomona-Pitzer held its third annual cross country invitational for both men and women’s teams, hosting 13 different schools for the men and 12 for the women.

The men started off running an 8,000-meter race around the course that was set for them around the Pomona-Pitzer campus.

Hayes managed to have the lead within the first two miles but fell behind Pomona-Pitzer and Cal Poly Pomona.

Sophomore Steven Ing of Cal State San Marcos took the lead with 300 meters to go but senior John Carrell of Cal Poly Pomona passed him and finished in first place.

“I felt that we were too aggressive on the men’s side but it was a narrow and challenging course,” head coach Bryan George said. “We went a little too hard and it hurt us in the second half.”

“We had good points in the race but I feel that it allows us to push even harder,” Hayes said. “Whittier beat us and we can beat them because we have before so it gives us that little extra push for next time.”

Senior Shelby Sato led the Leopards finishing in 69th place with a time of 25:16.5.

“I felt that we did okay but not as well as I wanted too but still happy,” Sato said. “As a team we did good even though we have girls hurt but we still did pretty well.”

Other runners for La Verne such as senior Yanet Urciaga came in behind her with a time of 25:40.8 placing 73rd, followed by freshman Jacquie Scherrer at 81st with 26:04.7.

Cal State San Marcos led in the first mile of the race and for a while there were no change in leads.

As the race finished, it was a battle for first at the last turn of the course.

Freshman Kelly Collins of Westmont had the lead but fell back to senior Ayded Reyes of Cal State San Marcos and Bouvatte.

Cal State San Marcos won the competition as Reyes came in first for the Cougars.

“I felt that it was a good race for both the men and women,” George said. “We had good packs for both and now it’s time to execute a race plan for the next.”

Next race for the Leopards cross-country team will be at the SCIAC Multi-Duals competition with the women starting off at 4:30 p.m. followed by the men at 5:15 p.m. Oct. 18 at La Mirada Park.