By Campus Times Editorial Board, Jacob Bogdanoff on October 25, 2013 in Editorials, Opinions 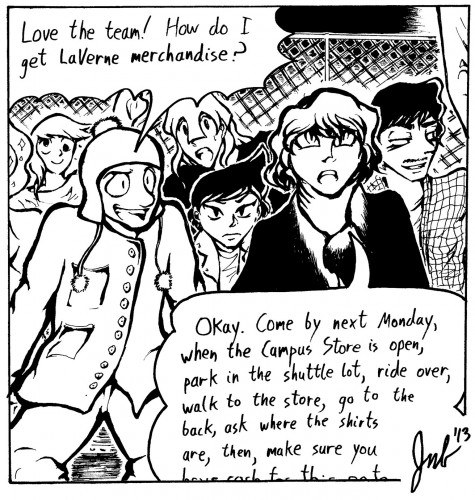 Throughout the years, the University’s school spirit has increased tremendously, especially with the increase in students, the newly renovated Ortmayer Stadium and a multimillion dollar Campus West in the works that will be home to baseball and softball.

Sporting events have become more than a social event; they have actually become competitive, and our fans more lively.

So why then, are there no supporting La Verne shirts and accessories sold at the sporting events?

Of course these items are sold at the student store in the Vista dorm building. But most parents and people who do not attend the school have no clue where that is.

Much of the time, the student store is closed during the hours of night games. But even during the day games, no parent or fan outside of the students would want to leave the game to buy a green and orange shirt.

During the Homecoming football game, a booth at the street fair sold such items, but we should be selling La Verne apparel and accessories at every sporting event or at least more than just homecoming.

Larger colleges and even competing Division III schools offer some type of stand of booth selling items to support their teams at most games, which encourages school spirit. Selling apparel at sporting events would not just encourage school spirit; it would most likely increase sales for the student store as well.

Many of the staff writers have been asked by parents of athletes where to get the apparel and also where to read the articles that we write – which brings up another issue.

Most of the time, parents are not told about the Campus Times and they miss out on the articles written about the players.

Obviously we do not expect everyone to read the sports articles written.

However, it would still be nice to place a small announcement in the printed roster made for every game at the University. Something simple for the parents or others wanting to know.

Fans want to read about the games, rather than just look up the score. We should be doing more as a University to encourage our sports and athletes, I know we are not USC, even though more students probably wear USC and UCLA gear to ULV games, but we can at least have spirit like them.