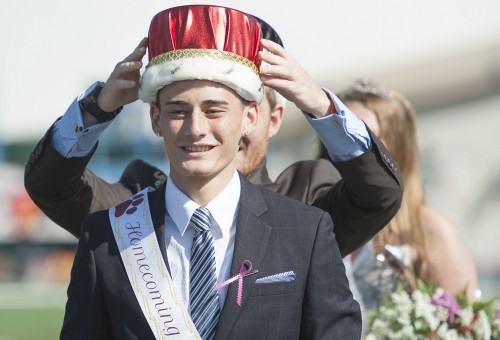 A week of Homecoming events culminated Saturday’s street fair, bringing together undergraduates, alumni and their families for a circus-themed event brought together by the Campus Activities Board.

Clubs and organizations participated with booths for the University, with the winners of the booth contest and Home­coming court announced during the halftime program of the football game.

“I feel like I represent everything the University stands for, I try to be a model citizen,” resident assistant Turney said.

All 10 members of Home­coming court walked in pairs across the football field and lined up behind giant magician hats.

The king and queen were revealed after everyone shouted “abracadabra” and the ULV dance team dressed like white rabbits popped out of the magician hats with signs revealing who had won.

Mejia and Turney were both excited and shocked following the announcements.

Mejia, surrounded by her sorority sisters immediately after the crowning, was overwhelmed with support from those around her.

“I am happy and feel like I made my sorority very proud,” Phi Sigma Sigma member Mejia said.

The entire court including princesses Larissa Nobles, Candace Toogood, Bethie Ross and Raquel Badayos and princes Walter Harper, Ziggy Azarcon, Julian Burrell and Marc Okimura along with Turney and Mejia, all walked in the parade of floats and alumni earlier at the street fair.

“Homecoming court is something that has been passed down through the years and seeing alumni here who were on court just shows how La Verne is very united and very community-oriented,” Toogood said.

The Homecoming court members were filled with excitement and nervousness the entire morning before the crowning, but most were proud to be representatives of their class.

Friday brought homecoming court a less glamorous event called Pie the Court, where participants had the chance to throw a pie at the princes and princesses.

More than anything, the Homecoming court took the week’s events as an opportunity to welcome the beginning of the end of their time in college, especially Saturday.

“I think Homecoming court is an important tradition for seniors to look forward to before they go off to the rest of their lives, and homecoming is something for alumni to come back and still be a part of the University,” Turney said.

One of the most popular booths set up was by the Veritas Society, an organization for individuals that establish the University as a beneficiary of a life insurance policy.

The Veritas Society handed out sunglasses and allowed fair-goers to mix and match colors.

Each member wore tutus, which supported their gerontology philanthropy.

ASULV organized the float parade during the street fair and had a booth with tossing games, awarding participants with seat cushions.

The best decorated float was given to Sigma Alpha Epsilon, who designed a submarine.

“It’s definitely been better than last year,” senior political science and economics major Ava Jahanvash said. “There are a lot of newer clubs and there is a lot of participation going around, so it has been a great Homecoming.”

Kellie Galentine can be reached at kellie.galentine@laverne.edu. 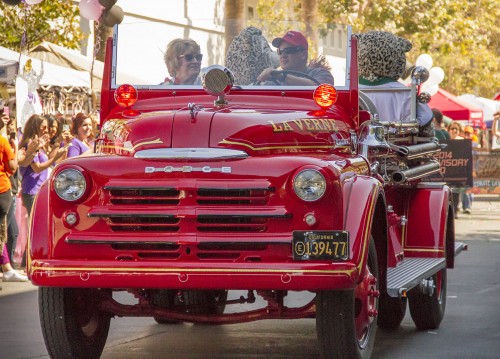