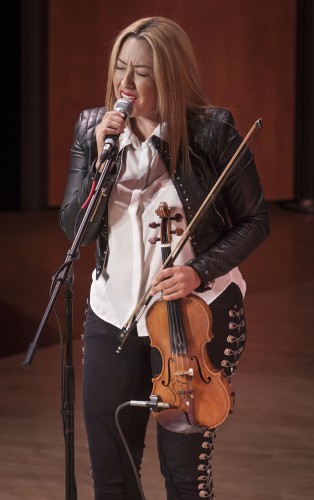 Suemy Gonzalez performs “Las Mil Amores” on violin and vocals with Trio Ellas Sunday in Morgan Auditor­ium as a part of the Sundays at the Morgan program. The group describes its style as a mixture of mariachi sounds and classic romantic music. Gonzalez is currently a senior at USC Thornton School of Music. / photo by Stephanie Ball

Acoustic sounds of violin, guitar and guitarron filled Morgan Auditorium Sunday evening as the soulful vocals of Trio Ellas performed a variety of mariachi music in Spanish and English.

Trio Ellas is a female Latin-American mariachi group based in Los Angeles.

Suemy Gonzalez, a senior at USC’s Thornton School of Music, Nelly Cortez, a fourth generation mariachi musician and Stephanie Amaro, a musician who specializes in various genres, such as electronic rock and mariachi, are members of the group.

“I liked it a lot,” said sophomore biology major Diana Gonzalez. “I’m Mexican, so it’s a part of my culture and my heritage.”

“I heard some of the songs before and I didn’t really like them at the time, but this time I did. I enjoyed it,” she said.

The trio combined the elements from the different instruments to create Mexican folk music.

They performed covers of many mariachi classics in their own interpretation with classic and contemporary twists.

The pieces varied significantly, with some slow, romantic songs and some upbeat, energetic songs.

Trio Ellas performed “Noche no te Vayas,” a famous Latin song that is melancholy and romantic.

The trio delivered this piece more ballad-like than the original, with a slower pace and added more romantic aspects.

“Route 66” was different from most of the other songs on the setlist.

It is very upbeat, with elements of country music along with mariachi touches.

The trio’s cover of a familiar Bee Gees’ song, “Emotion,” was an audience favorite.

The concert ended with a standing ovation after “Ojitos Traidores,” and the audience shouted “Otra! (‘again’),” resulting in an encore.

Many students and guests in the audience were able to relate to Trio Ellas’ performances because of cultural similarities and prior experiences with the songs.

“I definitely appreciate them singing while playing their instruments at the same time,” said sophomore business administration major Joel Sierra. “Because I play an instrument too, and that’s already hard enough to manage,”

“I was actually disappointed that I didn’t hear about them before,” he said. “My favorite was ‘Ojala Que Llueva Cafe’ because I have heard of it before and I really liked the way they presented the song and their energy.”

Some students from the Honors Colloquium were not very familiar with mariachi music but attended the concert because of an interest in learning more about the genre.

“I don’t know much about them, but I’m excited (to know more) because I really like this style of mariachi music and Spanish styles as well,” said sophomore music major Caelin Eager. “I try to come to the Sundays at the Morgan concerts whenever I can.”

The performance was part of the University’s music department’s monthly Sundays at the Morgan concert series.