By Robert Penalber, Sarah Golden on October 4, 2013 in News 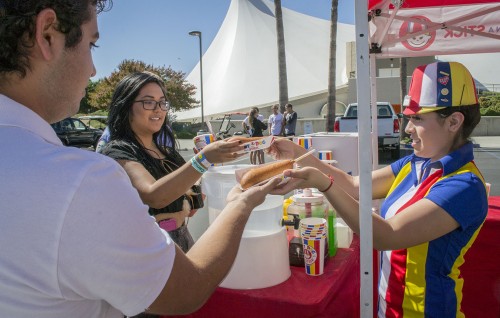 Senior criminology major Rajhane Navarrete and senior biology major Eduardo Fernandez pick up a free corn dog from Hot Dog on a Stick employee Taylor Cano at the Campus Activities Board’s football tailgate Sept. 27 in the South Quad. CAB set up a tent and gave away La Verne temporary tattoos and headbands. Hot Dog on a Stick joined the event with free mini-corndogs and lemonade. / photo by Sarah Golden

The policy, which will be in effect during all home football games for the fall 2013 season, was created to provide a venue for community support and engagement for the athletics program.

The program, though approved by the President’s Executive Council, the Board of Trustees and the city of La Verne, will be reviewed following the fall 2013 season to determine whether or not it will continue.

“There is a growing popularity for the football games, certainly conference play, and I think that got people interested in what was going on outside of the field, which is a great thing,” said Stanley Skipworth, director of campus safety and transportation, who helped write the policy. “With that comes a lot of traditions that are of interest to people that want to come here.”

The policy has been in development since early February as a response to the growing activity in Parking Lot A, adjacent to the football field, which caused safety concerns, Skipworth said.

“It started becoming more of an issue because Lot A used to always be empty, but once the new residence hall opened, it wasn’t so empty anymore,” senior director of advancement operations and services Bianca Romero said.

“When Stan came on board after his first month or so, I gave him a call and told him there were some issues with alumni wanting to reserve space and we wanted to follow protocol. There just wasn’t a written policy anywhere, so I asked Stan if we could get together and meet.”

Among the team that helped develop the policy were Skipworth, Romero, athletic director Julie Kline and Monika Moore, executive director of alumni relations. The general idea was to create a formal policy and give it structure.

“We want to make sure that all participants in the pilot tailgating policy are compliant, meaning current students, parents, alumni groups and any other people from the community,” dean of student affairs, Loretta Rahmani, said.

The southwest row of Lot D was chosen as the designated tailgating area for several reasons, one being that it is away from La Verne’s residential area, Rahmani said.

One of the primary concerns with the new tailgating policy is monitoring alcohol consumption.

“Tailgating isn’t exclusive to alcohol, and we emphasize that,” Skipworth said. “In this case, alcohol is a very specific part and it’s not the prevailing part. It’s about the fellowship, the socializing, the energy of the game day experience. We want to capitalize on that.”

The spirit is not to have people drink in excess, but to enjoy their time before the game and all be within reasonable behavior, Rahmani said.

Still, administrators are optimistic, turning to the first tailgate as an example.

“Everyone thought it was fantastic,” Moore said. “There were small things, like people figuring out what the policy was exactly, but everyone thought it went really well. I think everyone’s looking forward to this season of home games.”

“If the pilot program goes successful, as I expect it to be, then we’ll work with more partners all throughout campus so we can fine tune it,” Skipworth said. “There’s a lot of schools in the conference, and we want to be consistent with them.”