By Campus Times Editorial Board, Jacob Bogdanoff on October 18, 2013 in Editorials, Opinions 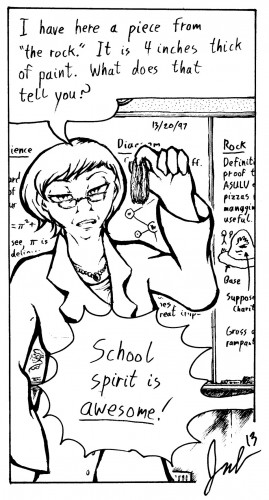 There is something different about the lawn in front of Founders Hall; it is not like the rest of the grass on campus, it is dead. If the dead grass was not a big enough eyesore there is also an abnormal sized rock on the grass that sits on top of a slab of concrete.

Clubs and Greek life use the Rock to promote events or just paint their club name or Greek letters on it. Painting the Rock is a tradition, so much so that something that was once done once a week is now done everyday, giving students essentially less than a day to see what is painted on the Rock. So is it even worth it?

The discussion of the Rock has been debated for years and the closest thing to a solution that the University has proposed is the concrete slab that sits around the Rock, which now gets painted as well so it serves no purpose.

Rock paintings have now even turned into a cult-like worship ceremony that occurs from 10 p.m. to midnight, which would not be a problem but the morning after there are candy wrappers on top of the dead grass. Aside from the noise complaints from the late night rock paintings, it is also not aesthetically pleasing to the eyes of potential students and their parents when they are here on a campus tour.

“And here is our Rock that we take great pride in and we paint every night,” says the campus tour guide.

“Do you realize your pride is killing the grass and making this campus look ugly?” says the bright high school student.

From the outside looking in, it seems cynical to keep painting the Rock, but at the University of La Verne, to throw out this tradition would be blasphemous to many.

Underneath the layers of paint there lies a sad rock waiting for its life to end, so let’s grant that wish and end the Rock’s life.

Traditions come and go, and people forget about the tradition and also forget why they even did the tradition in the first place. Students used to paint a sidewalk that was in Sneaky Park, it was killing the grass so they stopped.

No one mourns the sidewalk that used to be in Sneaky Park and no one will mourn the rock after a couple weeks.

The Rock that has sat there for years now needs to become a rolling stone and roll its way off campus.

The Rock serves purpose for a small population of the University.

Many students probably do not care if the rock stays or goes, but one of two things will eventually happen – either the grass in front of Founders Hall will just turn into dirt and mud so that Greeks can have their Rock paintings every night or the Rock gets destroyed. A dirt field in front of one of the University’s prestigious buildings would not get a positive response from potential students.

Many professors and students have openly spoken about how much they want the Rock gone, but the University has had the mentality of The Rock, not the one in front of Founders Hall, but the WWE superstar and have basically said, “It doesn’t matter what you think.”

But do they really smell what the Rock is cooking? It’s dead grass.