By Jolene Nacapuy, Ryan Gann on November 8, 2013 in Basketball, Sports 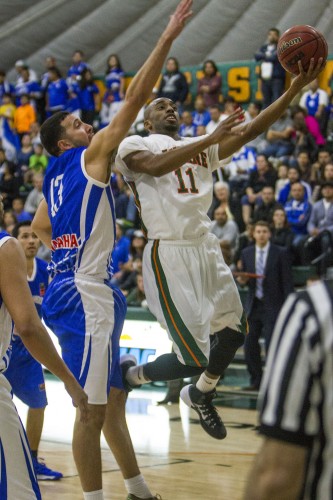 Senior point guard Alonzo Young attempts a layup against El Salvador’s James Valladares in the second half of the men’s basketball game Wednesday. The Leopards went on to lose to the El Salvador National Team, 78-77, after rallying from a 15-point deficit in the second half. / photo by Ryan Gann

The El Salvador National Team scored on a dunk in the final seconds of the game to seal the victory.

“The game didn’t go the way we wanted it to,” sophomore center Brian Stiver said. “But we have to keep our heads up and learn from the experience.“

To start the game, sophomore guard Weston Newell made a shot just over three minutes into the game putting La Verne on the scoreboard 3-2.

The Leopards struggled to keep a steady lead as El Salvador constantly put up shots to keep them in the lead.

“It was a good and tough game,“ center Niall Harrison said. “We were a little too relaxed and they made a run that we couldn’t just come back from.“

Freshman guard Khaneal Mason made a three-pointer at 8:14 to tie the game 14-14.

“The younger guys tonight really stepped up their game tonight,“ senior guard Ronn See said. “They were putting up points and helped us build through the game.“

Freshman guard and forward Kendall McClain added another three-pointer for the Leopards extending the lead to 26-22.

Two good free throw shots by guard Salvador Bandek and a lay up by forward Oscar Rivera allowed El Salvador to tie the game at 32-32.

“The game tonight was fun and a lot of fan support,“ See said. “Tonight isn’t really the way that we wanted to come out, tying the game all the time but we’ll work on it.“

Entering the second half, tied at 34-34, forward Oscar Rivera of El Salvador put in a lay-up for the team scoring the first basket for the second half putting them in the lead once again, 36-34.

Constant mistakes by the Leopards allowed El Salvador to make lay-ups and free throws by forward Matthew Wallace with 7 minutes left to play gave the team a 10 point lead, 63-53, over La Verne.

This was the largest lead in the game so far.

“We have a great group of guys this season,“ Harrison said. “A lot of younger guys and we just need them to stay focused when it comes to large leads. Not only them but for us returnees this season.“

Three-pointers by senior Brett Stephan and McClain cut the lead to just four points, 76-72 followed by a dunk by Young to go to just two points behind, 76-74.

Young made just one putting La Verne ahead, 77-76 with just 10 seconds left in the game.

James Valladares dunked the ball in the final play of the game as the El Salvador National Team to capture the win.

“Each day we are pushing each other and getting better,“ Stiver said. “This season is going to be a special one, we have a great group of guys and I expect big things to happen.”

Next game is at 7 p.m. Nov. 15 against Pacific Oregon at Frantz Athletic Court.

“For the next game, we just need to hit the weights with (strength coach Matt) Durant, Harrison said. “Practice harder and be smarter and we’ll bounce back and come out with the win.”