By Celine Dehban, Julian Burrell on November 8, 2013 in Football, Sports 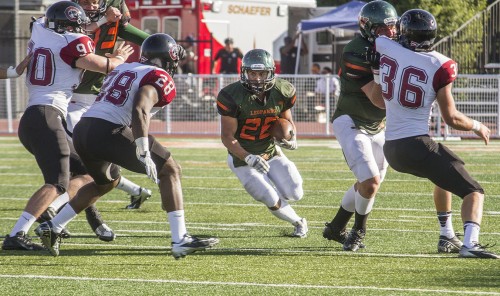 Though it was a record setting day for the Leopards as senior running back Matthew Biggers rushed for 159 yards to become the all time leading rusher in La Verne history, Chapman still bested the team on the scoreboard in a 45-7 loss.

In spite of Biggers efforts, the Leopards were consistently plagued by turnovers and defensive struggles that hampered their ability to get into the end zone.

“I think Matt breaking the record is one of the biggest positives we can take from this game,” head coach Chris Krich said. “We ran the ball really hard today and we’re still improving and that’s all I can look for.”

Biggers’ rushing game, which included a 40-yard rush to open up the second half, was the highlight of the day for La Verne.

“It’s been a journey. I never expected to do that, and I didn’t even realize that we did all that because I was so busy trying to bring us back from this deficit,” Biggers said.

Chapman was able to make long throws seemingly at will and the defensive line for La Verne refused to have a consistent premise.

“We did play hard and we did make the most of certain opportunities, but when it came time to score we just couldn’t capitalize,” junior wide receiver Jamar Johnson said.

La Verne was unable to gain much momentum throughout the game and was shut down at nearly every turn by the Panthers.

“There’s nothing that we don’t have to improve on,” Biggers said. “Chapman’s a great football team, but so are we. We need to just focus on getting better in every aspect.”

Turnovers were a major hindrance for the Leopards throughout the game, including two interceptions and one lost fumble.

The Panthers were able to capitalize on La Verne’s errors and continued to put points on the board for the rest of the game.

Senior quarterback Justin Gomez threw for 11-19 pass attempts, frequently hooking up with senior wide receiver Chad Lucas for five receptions including the Leopards’ one touchdown of the game.

The team remains optimistic on its remaining games.

The general consensus among the team is to end the season on a high note by making improvements all around.

“The only way to go is up,” Krich said. “We’re in a situation where we need to reevaluate where we’re at and make some changes to what we’re doing.”

Another critical point of concern are the Leopards players with the most tenure; the La Verne seniors only have a few more games left in their college careers.

Krich expressed a desire to make the most out of the remainder of their final season.

“I think the most important thing is that we find a way to send these seniors out on a positive note,” Krich said. “They’ve put a lot of blood sweat and tears into this thing, so that’s the biggest priority right now.”

For a team that has come a long way since its streak of 19 straight losses just two years ago, the Leopards continue to look towards improvement.

With the loss La Verne falls to 2-3 in the Southern California Intercollegiate Athletic Confer­ence and 3-4 overall.

“If we finish 5-4, I can say that we have improved every season, and I’ll take that,” Biggers said.

The Leopards will return to action 7 p.m. Saturday at Ortmayer Stadium against the Cal Lutheran Regals.