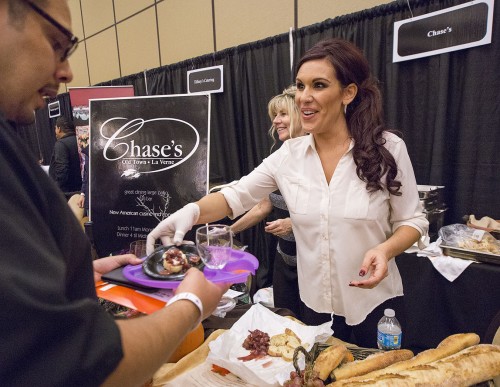 Jennifer Ciancia, an employee of Chase’s on Third Street in downtown La Verne, provides samples from the menu to guests at the 13th Taste of La Verne at the Sheraton Fairplex Conference Center Saturday. The Taste of La Verne event features samples of food, wine and a variety of other alcohols from restaurants around and near La Verne. / photo by Nicole Ambrose

Wine and food lovers brought their palettes to the Sheraton Conference Center Tuesday night for the 13th Taste of La Verne.

It was my first Taste of La Verne, and it tasted pretty good.

The Conference Center was filled with 30 booths that represented local restaurants and wine shops handing out free samples of their signature menu items.

“We bring together all members of the community,” Chamber of Commerce President Brian McNerney said. “It’s a melting pot of not only food, but people.”

The night included food, wine and a silent auction. Some Downtown La Verne favorites were at Taste of La Verne showing off some of their best cuisine.

Pappas’ head chef Travis Flood was handing out free samples of their creamy orcheta macaroni and cheese with rotisserie ham. This was my first time tasting the Pappas food and the small sample lived up to the hype.

Marketing director Reef Colman representing Jersey Mike’s was not going to pass up an opportunity like Taste of La Verne to get people to come to Jersey Mike’s. At his table was a wheel of prizes for people to spin and potentially win.

“The gathering, the marketing and the networking is what makes all of this a great event,” Colman said.

Co-owner Ernesto Aguirre said that Taste of La Verne is a great place to meet restaurant owners to see if they want to put Aguirre’s tequila on their menu.

I was able to try their silver tequila, it went down smoothly, but had that tequila taste that we all love.

“We have a lot of regulars, so when we come to something like this we’re just trying to get more people to come in,” Alessandra Lopez, who was working the Packing House Wine Merchants booth, said.

Prepared with an array of wines, Lopez filled up my glass multiple times with different wines, each one exploring a different flavor.

Packing House Wine Merchant does themed mid-week and weekend wine tastings for ones who do not know too much about wine, but are looking to learn.

The wine tastings also come with a special house made dinner prepared by their chef.

Round Table Pizza brought more of a casual feel to the event, handing out magnets, coupons and cups of Budweiser. It made me feel at home and was surprisingly refreshing after the wine and tequila I had consumed.

The reception that many of the restaurants and wine shops received made it obvious why they come here and hand out their products for free.

Walking around the Conference Center, the environment was exuding positivity, not only from the owners and employees, but also from the wine and food tasters.

As I scurried my way through all the liquid delights that Taste of La Verne had to offer, I found myself having a hankering for something sweet and that is when Bowl of Heaven pulled me their way.

The sweet yet healthy treat was perfect for a night filled with alcohol and body heat.

Bowl of Heaven uses different fruits to create a smoothie-like treat that is not only good, but good for you.

All of their stuff is lactose- and gluten-free.

A favorite among tastees was Third Street Wine Shop’s merlot.

They gathered around the booth holding out their glasses as if they were dying of thirst and the merlot was the solution to quench it. Naturally, I had to try it.

The room temperature drink hit my lips and I realized what all the hype was about. The night ended with the silent auction winners taking home their prizes.

My cup stayed filled and my stomach stayed full. Taste of La Verne was anything but a sobering experience.