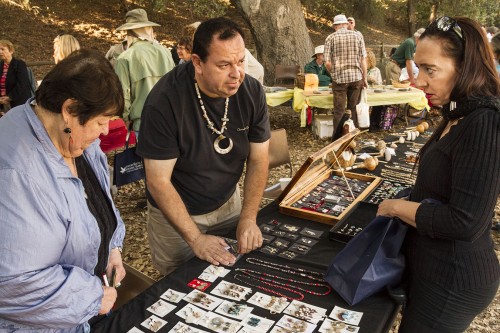 Michael Bracamontes sells traditional Tongva jewelry to Ceeroosha Andreas at the Rancho Santa Ana Botanic Garden Acorn Festival Saturday. Bracamontes makes the jewelry and sells it with the help of and his mother, Dlia Bracamontes. Andreas returned to the festival on the second day to buy some more earrings from them. The festival celebrated the traditional harvest season for the Tongva tribe, for whom the acorn is a staple in their diet. The 13th annual acorn festival was held Nov. 16 and 17. / photo by Ryan Gann

Native American dancers, singers, artisans and tribal leaders all participated in the Rancho Santa Ana Botanic Garden’s Acorn Festival last weekend as part of a celebration of the modern connection between the California native plant and human life.

“This is an event with an educational focus,” Eric Garton, director of visitor services, said.

“It talks about the way that native Californians, both past and present, use California native plants. It also mixes some culture, some dancing and songs and story-telling, along with a lot of make-and-take type crafts for kids.”

Both Saturday and Sunday featured a marketplace and crafts section for kids where children of all ages could create traditional Native American tools and wares, including baskets, dolls and dishes.

“This is the first time we’ve been here and it’s really cool,” said Mary Romero, Diamond Bar resident, as one of her two children went to work on a Native American style doll at one of the craft centers.

“It’s great seeing all of these tables teaching kids how things were done at a time when Native Americans were all doing things like this.”

In addition to the crafting area, attendees were also treated to traditional song and dance performances from the Gabriel­ino/Tongva Tribe. Members of the Tongva Tribe displayed traditional music from their culture from pre-European California.

“I just think it’s important to share our culture so people are aware of who we are. A lot of people today see us, but they don’t understand us. Or they see us and they don’t know who we are since we blend into the population,” said Kevin Nuñez, performer for the Tongva tribe.

Nuñez’s role for the day was the Chief’s Guard, a role whose duty is to protect the tribe leader. Though the role has taken on a more symbolic role in modern years, current holders of the title are still prepped in the same way that the ancestors were.

The Botanic Garden also has significance for the Tongva tribe personally.

“We actually had a village near here, not too far from where we’re standing,” Nuñez said.

“They gave us an opportunity to design a small village, an example of one, with our elders and this gives a chance to come out a share our culture with everyone.”

Because California has such a diverse plant life, playing host to almost 6,000 species of plants, the Botanic Garden is the perfect showcase to tie in both the native plant life and Californian life.

“The performers are dressed up in their regalia to let our guests know how people have lived here for a lot longer than a lot of us been here for,” Garton said.

Event holders hoped that the event would hold bring the two cultures together through the arts of past times.

“We want people to go away with an appreciation for the plants and the natural amenities of California and the people have been living with these plants for thousands of years,” Garton said.