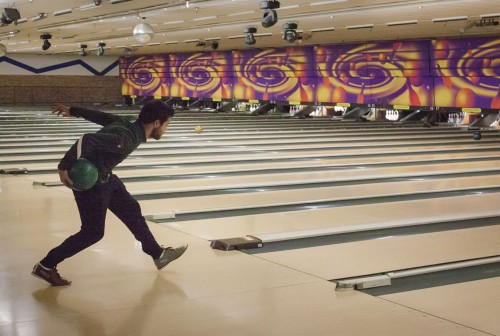 Senior Jared Taylor “strikes out” cystic fibrosis for Iota Delta’s Bowl for Breath on Saturday. The sorority chose bowling because it is not a strenuous sport so people with cystic fibrosis can participate. / photo by Stephanie Ball

Sorority members, friends, family and members of the community learned about cystic fibrosis, bowled and socialized for a good cause at Chapparal Lanes on Saturday for Iota Delta’s annual Bowl for Breath.

Students and family members were sponsored bowling lanes and all proceeds go to the nonprofit Cystic Fibrosis Foundation.

Cystic fibrosis is an inherited chronic disease that affects the lungs and digestive system. An estimated 30,000 Americans and 70,000 people worldwide have been diagnosed.

“It’s an annual tradition that is the grand finale of our Cystic Fibrosis Week,” said Carissa Miranda, junior TV broadcasting major and Iota Delta public relations chair and web design chair. “The goal is to raise awareness of cystic fibrosis and its widespread effects, and to raise money for the Cystic Fibrosis Foundation,” she said.

Cystic fibrosis is Iota Delta’s main philanthropy and they dedicate a week to supporting those with the disease every year through various events to promote the cause.

“The reason why we do cystic fibrosis is because one of the founding members had a cousin that had this disease, so when she was starting Iota Delta, they decided to use this as our philanthropy,” said Katie Lewis, sophomore liberal studies major and Iota Delta fundraising chairwoman.

“I think it’s a really good way for people to come out and raise money,” she said. “Bowling isn’t for everyone but they can still sit and talk and be social. They can meet each other and raise money for a good cause.”

George Sawatzky, from the Orange County Cystic Fibrosis Foundation, and his wife, Diana, also attended the event as guest speakers and spoke about what they do for the foundation.

“We are not big,” Sawatzky said, urging people to donate to the cause. “The government doesn’t give us huge government grants, unlike other associations like breast cancer.”

A table was set up at the entrance for people to sign in, donate money or purchase goodies.

The sorority was also selling gift baskets, cake pops, bracelets and rose pens at the event and all proceeds were to go to cystic fibrosis. The rose pens were made because kids who have difficulty pronouncing “cystic fibrosis” are taught to say “65 roses” instead.

“My favorite part is to see how people are actually supporting this foundation,” said Yvette Carrillo, junior political science major and Iota Delta philanthropy coordinator. “To see other people come out and support this, I feel like we actually have a chance to defeat this disease.”

“Being an active member of Iota Delta, I have to say it was pretty memorable,” said Karla Ruiz, sophomore computer science major and Iota Delta member. “I got to meet many alums, who were sisters, and I got to bowl with some of my sisters, which was fun.”

Cystic Fibrosis Week was during the week of Nov. 11 and other events included a rock painting, bake sale, a 24-hour jumper event and concluded with the Bowl for Breath on Saturday.