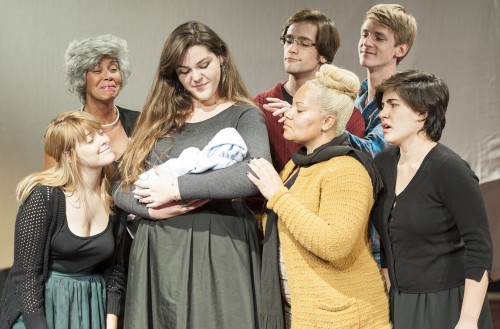 Christopher Durang’s “The Marriage of Bette and Boo” is the theatre department’s new fall production directed by Steven Kent. The play follows a newly married couple, Bette and Boo, played by Sarah Rae Jackson and Jacob Tittl, and the antics of their comically dysfunctional family and friends. In this scene titled “We Will Call Him Skippy,” the family argues about what to name the newborn baby. / photo by Hunter Cole

The current state of the Dailey Theatre is chaotic, as one would expect a week before opening night. The theater department’s production of Christopher Durang’s “The Marriage of Bette and Boo” brings the black comedy to new dimensions.

“This is a much more visually explosive production,” said director Steven Kent, who has previously directed a Croatian-language version of the play.

“It’s a long play that requires a lot of looks, different scenes, different places, and also the screens are moving, so it’s not simple,” said lighting designer Carolina Ortiz.

The projection screens will display images and videos that will produce different transitions and moods in between and throughout scenes.

“Every projection screen I’ve ever worked with has been fixed in position, and these move around,” said stage manager and junior theater major Bo Powell. “It’s a new challenge.”

The raked stage built especially for the production is slanted downwards toward the audience.

“A raked stage pushes the audience and cast into a more empathic relationship,” Kent said.

Besides the aesthetics, Kent said he is also excited to see how the audience will react to the heavy topics that are addressed in the play.

“Some of the most horrible things happen in this play, and they’re right next to the funniest things,” he said.

Ortiz decided on the lighting concept after Tollefson made a scaled model of the set.

“Right now, we don’t know how the audience is going to react, and neither the actors, so once the audience comes, it’s a different show,” she said. “(The audience) is the final member of the whole production.”

In the play, one of the title characters, Bette, is portrayed by senior theater and child development major Sarah Rae Jackson who was first introduced to the character in one of her theater classes.

“I have been pretty obsessed about (Bette) for a couple of years now (since) I was suggested to play this part,” Jackson said. “As scary as it sounds, I think she reminds me a lot of myself, which is not necessarily a good thing, but it’s not necessarily a bad thing either. I think it’s good for me to kind of embrace some of my faults.”

Bette and Boo’s son, Matthew Hudlocke, portrayed by junior theater major Daniel Ramirez, is a scholar who is trying to make sense of the world and really has no one to turn to other than his books.

“This is probably the realest character that I’ve ever had a chance to play,” Ramirez said. “I’m expecting the experience to be pretty cathartic, just like a release of all those emotions that you have no where else to let them go.”

The play follows the lives of Bette and Boo and ventures through their lives together and all of the trials and tribulations that they encounter.

The entire play is told out of chronological order, presenting the characters and the audience with the challenge of keeping up with the many emotions that are acted out throughout the various scenes.

“I’m just excited to be able to go back and forth with my emotions and turn them on and off like a switch,” said senior theater major Jacob Tittl, who portrays Boo.

The cast is entirely made up of University students, including two CAPA students.

“We have really high quality standards of acting in this department,” Kent said. “Better than, frankly, at almost any university. They’re serious theater people.”

“I really like the cast a lot, they’re really fun people to hang out with and to work with,” Tittl said.