By Kellie Galentine, Uyen Bui on November 8, 2013 in LV Life 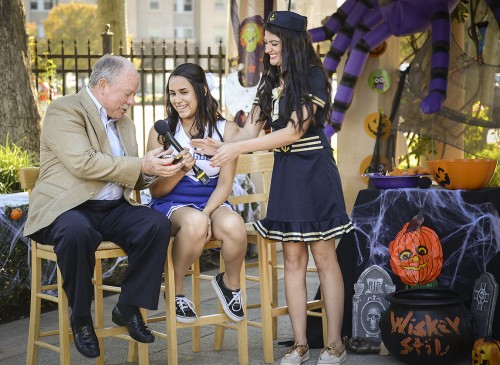 Harrison, dressed as a sailor, and Mejia, dressed up as a cheerleader, welcomed guests who stepped on-screen with trick-or-treating candy and lots of Halloween jokes.

“There were a ton of kids and people from the community, it was cool to represent the University and of course all of the kids are really cute,” Harrison said.

Kids were able to line up to go on live TV alongside Harrison and Mejia to get candy as well as share their thoughts about Halloween costumes and festivities. Visits to the hosts ranged from Iron Man to Jesse the Cowgirl. The kids who came on the show interacted with the hosts who had to improvise for the entire two hours.

“This helped us because we got to practice being on live TV,” Mejia said. “The pressure was really on and it was a lot of thinking on our feet,”

A round of Halloween princesses who went onscreen did a “princess dance” with Harrison and Mejia, just one example of how the hosts interacted with all of the trick-or-treaters.

“I like coming to this event for the community, seeing people we haven’t seen through the years and my daughter looks forward to being on TV, she looks forward to going up there because she isn’t shy,” Tiffany Vargas, La Verne resident, said.

Along with the Spooktacular, the downtown La Verne community hosts trick-or-treating for kids along D Street. There was also a coloring contest for kids of all ages and the winners got to go onscreen to claim their prizes.

The kids who went onscreen were able to be candid in their reactions to everything, and one child caused a lot of laughs when he asked Harrison what her costume was supposed to be.

Prior to the start of the taping the hosts danced around in front of the camera excited for the taping to begin.

For the two hosts, the Spooktacular was a great community news experience for their broadcast journalism careers.

“They get experience hosting and all of the behind the scenes crew were either students or alumni,” Shane Rodrigues, radio-TV operations manager, said.

Mainiero Square was decorated with cobwebs and mini jack-o-lanterns in the bushes and a giant blow up spider hanging from an overhang.

The show was cablecast on Halloween weekend and again in November on LVTV-3, Time Warner Cable, and Verizon Fios.

“I think it is really important to foster the relationship between the University and the community with events like the Spooktacular,” Harrison said.

Kellie Galentine can be reached at kellie.galentine@laverne.edu.