By Campus Times Editorial Board, Jacob Bogdanoff on November 1, 2013 in Editorials, Opinions 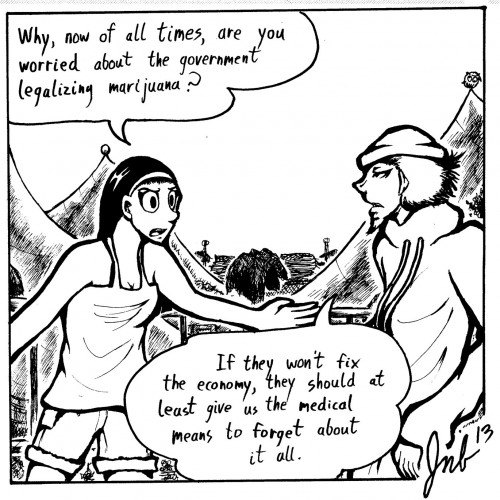 Marijuana is legal in 18 states for medical use and most recently in 2012 it became legal for recreation in Washington and Colorado, and now it is time for it to become legal on all levels. For the first time ever, a clear majority of Americans support marijuana legalization. A recent Gallup poll revealed that 58 percent of Americans support marijuana legalization.

Support for marijuana legalization has been a teeter-totter of a ride. In 2010 support hit 44 percent and in 2011 the support hit 50 percent for the first time, but now that the majority is clear, let’s give the people what they want.

The only age group that did not have majority support for marijuana legalization are people who are 65 or older, but instead of waiting for them to die off, let’s show them that what they saw in “Reefer Madness” was completely fictitious and nothing scientific. In hopes that Colorado and Washington create a domino effect, the Safer Alternative for Enjoyable Recreation has been continuously informing voters about marijuana and helped legalize the plant in the two states where it is legal now.

“What we really did is we inspired a long discussion in Colorado over the last eight years about marijuana — and about the fact that it is safer than alcohol which is really an important point that a lot of Americans still don’t understand yet,” co-founder of SAFER Mason Tvert said on the HBO program “Real Time with Bill Maher.” “We looked at survey data, we see that almost a third of Americans think marijuana is more harmful than alcohol which is insane, obviously.”

On the SAFER website they advocate that alcohol is involved in more violent crimes than marijuana and that alcohol has more of a negative effect on a community than marijuana. The website also takes a close look at the health risks of alcohol and marijuana and says that alcohol takes more of a negative effect on one’s health than marijuana. Uruguay is in the process of becoming the first country in the world to establish rules for production, distribution and sale of marijuana for adults. Do they know something that we don’t? There is a reason why out of all the drugs that are peddled on the streets of America that marijuana is being the one pushed to be legalized, because there is nothing wrong with it.

One Response to Majority wants to go green